Over half of those women interviewed had experienced issues wearing their hijab while in the operating room, and over 70% were not satisfied with the alternative uniform policy in place at many of the hospitals.

Over half of those women interviewed had experienced issues wearing their hijab while in the operating room, and over 70% were not satisfied with the alternative uniform policy in place at many of the hospitals.

In a new study published in the British Medical Journal, research by the British Islamic Medical Association and The Bridge Institute show troubling results when it comes to how Muslim healthcare professionals, especially women, are treated when it comes to the NHS dress code.

According to the survey and research, there remains an enormous lack of understanding and awareness when it comes to the current Department of Health Uniforms and Workwear guidelines and rules. There is also confusion around the Bare Below the Elbows (BBE) policy, as well as the specific rules regarding headscarf wear in the surgical operating rooms for doctors and nurses.

Many Muslim female healthcare workers face both harassment and bullying because of their choice to wear observable religious clothing while at work. Over half of those women interviewed had experienced issues wearing their hijab while in the operating room, and over 70% were not satisfied with the alternative uniform policy in place at many of the hospitals. 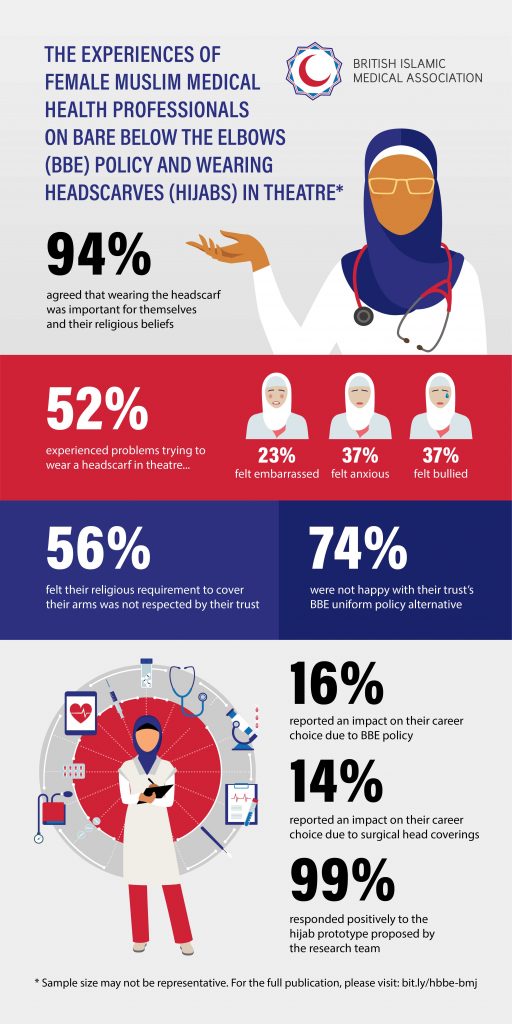 Worryingly, many Muslim healthcare professionals also felt that the confusion over uniform rules has led them to feel discouraged from pursuing surgical careers, while 16% reported a legitimate impact on their career because of the specific BBE (Bare Below the Elbows) policy.

The data from this important research suggests for the first time that dress code policies such as Bare Below the Elbows contribute towards the indirect discrimination of faith groups. Our research has highlighted the impact on Muslim women, and this may well affect other faith communities as well as our patients. We need inclusive policies, processes, and systems that support women to succeed in their careers rather than holding them back.”

The British Islamic Medical Association has issued a set of recommendations they are urging the NHS to take into serious consideration. Their key recommendations include:

1. A national dress code policy to be implemented with immediate effect. This must provide clear and inclusive guidance for all faith groups and address surgical head coverings in theatres.

2. All NHS Trust Equality and Diversity Steering Groups to review local dress code policies and undertake an equality impact assessment including the provision of specific guidance for faith groups.

3. Stakeholders such as Royal Colleges, Health Education England, the BMA, NHS Employers, Trusts and educators to provide and signpost faith-sensitive support for Muslim women affected by these issues.