“When a human being dies, all one’s deeds cease, save three: a Sadaqah Jariyah, [religious] knowledge [one leaves behind] from which others benefit, and a righteous child who prays for one” [Muslim].

In Islam, digging a water well is part of our tradition. Prophet Muhammad, on him be peace, was asked, “Which charity is best?” He replied, “[Providing] water.”’

Water is something we often take for granted. We tend not to notice how clean our drinking water is until we get a glass of water that isn’t as clear as we were expecting.

Globally, about 884 million people did not have access to clean or safe water in 2017, according to UNICEF. More than 300,000 children under 5 years old die from diseases due to unsafe drinking water. Those diseases include cholera, diarrhea, typhoid, intestinal worms, and more.

Open defecation is a huge contributing factor to unsafe water in countries such as India and Nepal. According to a study done by National Geographic on water inequality, 75% of drinking water samples from schools in Nepal had been contaminated with fecal bacteria.

This shows that rural communities get hit the hardest when it comes to gaining any access to clean water, or that there hasn’t been much awareness of why open defecation should be banned.

The world is also fighting the effects of climate change, which also contributes to water scarcity according to the United Nations. 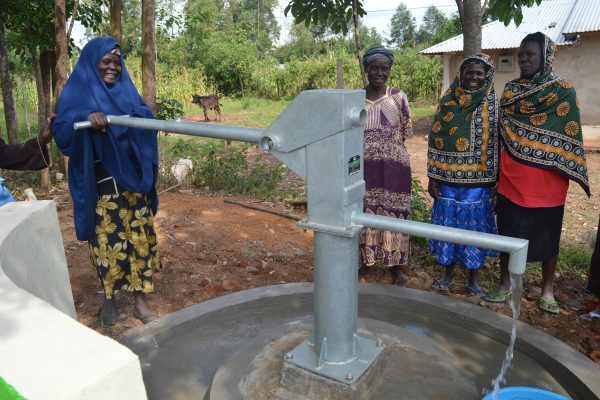 Women in Kenya express gratitude for a water well installed in their village. | Zakat Foundation of America photo

In Islam, donating a water well is a form of Sadaqah Jariyah. Jariyah translates from Arabic to “flowing” and Sadaqah meaning “charity.” We like to call it the ever-flowing charity because it continues to reach both the recipient of this charity and the giver after the donor’s death.

The Prophet Muhammad, on him be peace, said:

“When a human being dies, all one’s deeds cease, save three: a Sadaqah Jariyah, [religious] knowledge [one leaves behind] from which others benefit, and a righteous child who prays for one” [Muslim].

Sadaqah Jariyah provides immense reward in the Hereafter because of the ongoing benefits it provides to people in need in this life, which is why Muslims are devoted to giving Sadaqah Jariyah and give it a huge importance. Charity is also part of the five pillars in Islam.

Having access to safe and clean water is a human right, and Allah will reward those who care and help provide for those who don’t have it.

Zakat Foundation of America, a humanitarian nonprofit organization based in Chicago, has been helping Muslims fulfill Zakat and Sadaqah needs for the past 20 years. They have a water, sanitation, and hygiene program that has helped construct water wells and water pumps in countries that need it the most.

That’s more than 44,500 people who no longer rely on contaminated water to quench their thirst; at least 15,000 girls who no longer miss school to walk miles for fetching their family’s daily water supply, more than 25,000 children who are no longer susceptible to life-threatening water-borne disease, and countless animals who can now stay hydrated and healthy, offering their fresh dairy for consumption. And spiritually, the giver is rewarded for each human, plant and animal that drinks from these clean water sources.

Please visit zakat.org to learn more on how you can get involved in building your very own water well or a water pump that can benefit so many.