Time to get rid of those January blues!

Time to get rid of those January blues!

With the January blues taking us all full force, the idea of a weekend break may seem like the one thing you need. Check out the alternative guide to Pais, away from the glitz and glam of popular tourist sites.

As the most visited city in the world, Paris the city of romance really needs no introduction. Having been to Paris numerous times before and done all the conventional tourist sites I wanted to see a different side to the city and venture beyond the glamorous veneer. This was also my husband’s first visit to Paris who has always maintained a cynical skepticism over whether the city (or most of Western Europe to be honest) could have anything to impress him – his idea of a city break is more on the hustle and bustle of Ho Chi Minh city end of the spectrum than the art gallery hopping in Paris end. After some convincing and promises of an alternative Paris weekend we were booked and ready to go- with pressure to deliver and low expectations to surpass.

So here is my guide to an alternative Paris weekend break: 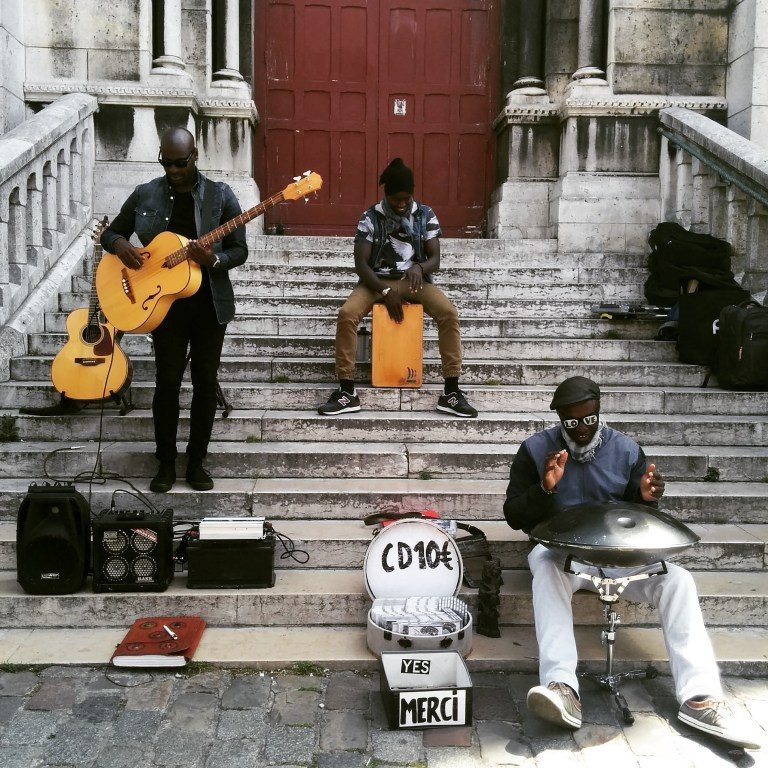 The housing estates of Paris’ suburbs that have been the setting of tumultuous riots and made famous on an international stage due to the film La Haine and the events around filming it is definitely not what most would associate with Paris. The housing estates ofParis are completely different from those of places like London which are mostly inner city urban estates a stone throw away from million pound houses and central London. In Paris the estates are somewhat ghettoized –far removed from the city and in seemingly quiet suburbs and valleys. Chanteloup proper has villas, nice cars and quaint pattiseries whilst down in the valley below – Chaneteloup Les Vignes houses the depilated grey concrete blocks housing thousands – a large proportion of which are originally from North Africa or sub-Saharan Africa. To me this is as much a part of Paris as the up-scale arrondisements and acclaimed architecture of the city’s most celebrated neighborhoods – to see just the latter is only one skewered side of Paris. As we drove toParis from Calais, Chanteloup was a short detour on the way to Paris proper and we simply drove around for a while before parking up and walking around on foot. 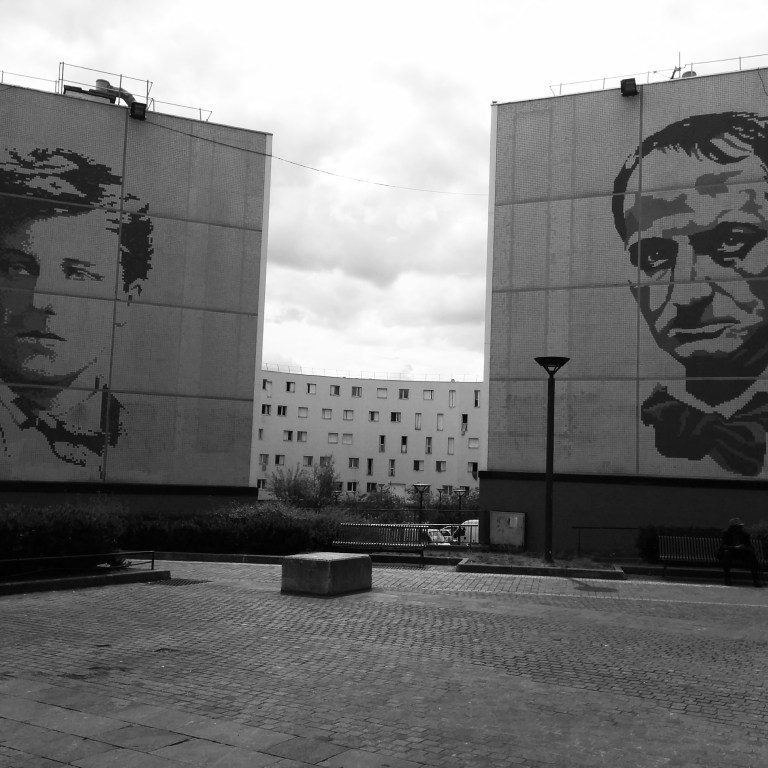 mostly ethnic -it felt more like being in a village in Morocco than a suburb just outside of Paris. Bike tricks, mobiles playing French rap, community shops selling self service virgin mojitos out of cylinder drinks machines, Halal taco shops, Senegalese Hijabi girls and kids lounging on black leather couches outside the estates all mesh into the housing estate and on the surface at least looks like a community in the literal definition of the world. Then a Police van came round the corner – no siren, driving slowly and deliberately, filled with officers visibly holding submachine guns. As I was getting back into our car the van slowed down almost to a halt and the officer in the front passenger seat raised his submachine gun to ensure it was fully visible and gave me a very firm and determined stare that seemed to last uncomfortably long. Maybe our British license plate car was suspiciously out of place or maybe that is just a normal feature of the daily police patrols in the valleys of Chanteloup.

A cemetery isn’t what you’d usually include on a holiday itinerary however the Pere Lachaise Cemetery is Paris’ largest garden cemetery with over 1 million bodies buried here and is simply stunning. 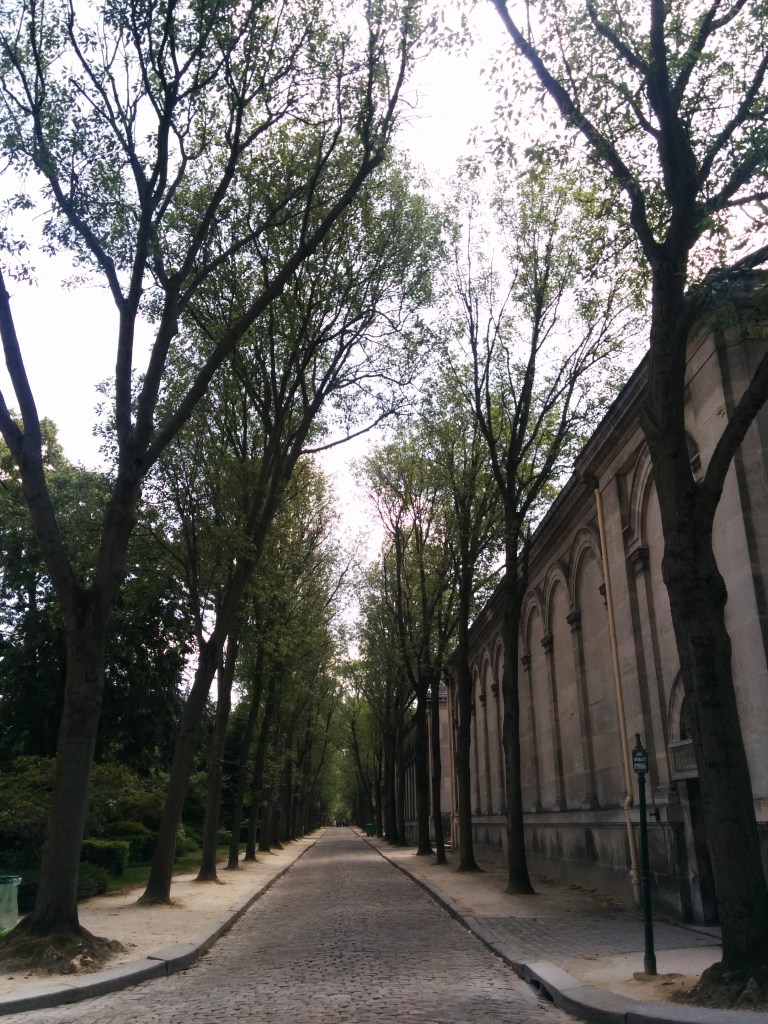 Winding tree lined paths, beautiful eeriness, World War 1 memorial graves and of course – the grave of Oscar Wilde. Exiled from England Oscar Wilde died and was buried in Paris. His body was moved to the Pere Lachaise cemetery in 1909 and has become a sort of pilgrimage for admirers. A tradition of wearing lipstick and kissing his grave has been curtailed by a glass barrier to prevent damage to the grave – admirers now kiss the glass and hundreds of lipstick marks can be seen. The epitaph on his tomb is a very fitting extract from one of his poems and reads: 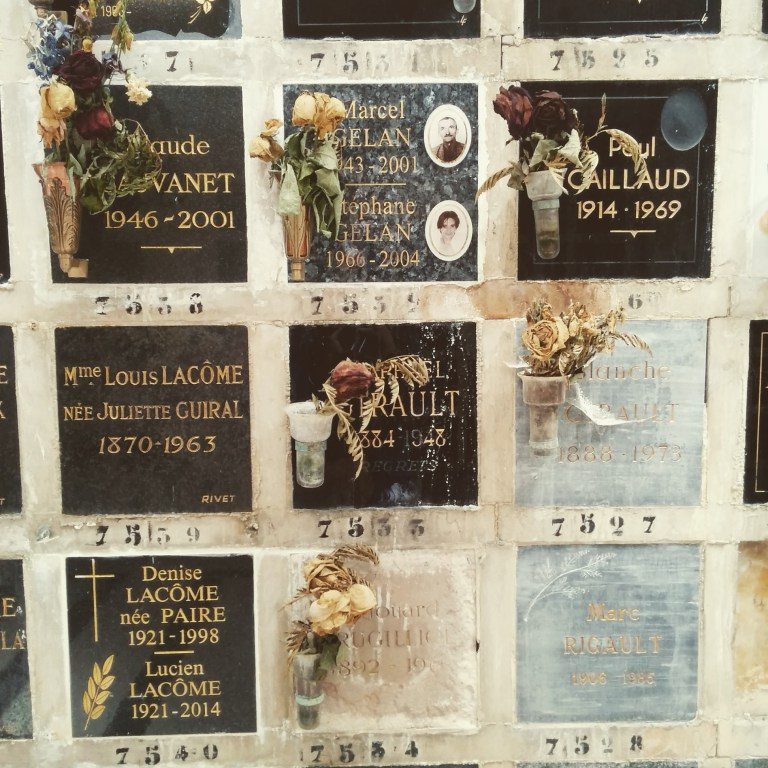 And alien tears will fill for him

Pity’s long-broken urn,
For his mourners will be outcast men,

In addition to the graves there is also a beautiful columbarium which contains the remains of those who requested cremation. Thousands of named plaques line the walls adorned with mostly dried flowers. The older plaques have vintage style portraits – the dried roses and cobwebs combined provide an eerie sense of the passage of time and finality of death.

One of the largest mosques in Paris, the stunning grand mosque is designed in Mudejar style – from the Andalusian and Moorish Muslim influences. Covering nearly a hectare the large mosque has a stunning courtyard and terrace paved with fountains, marble and intricate tiling. 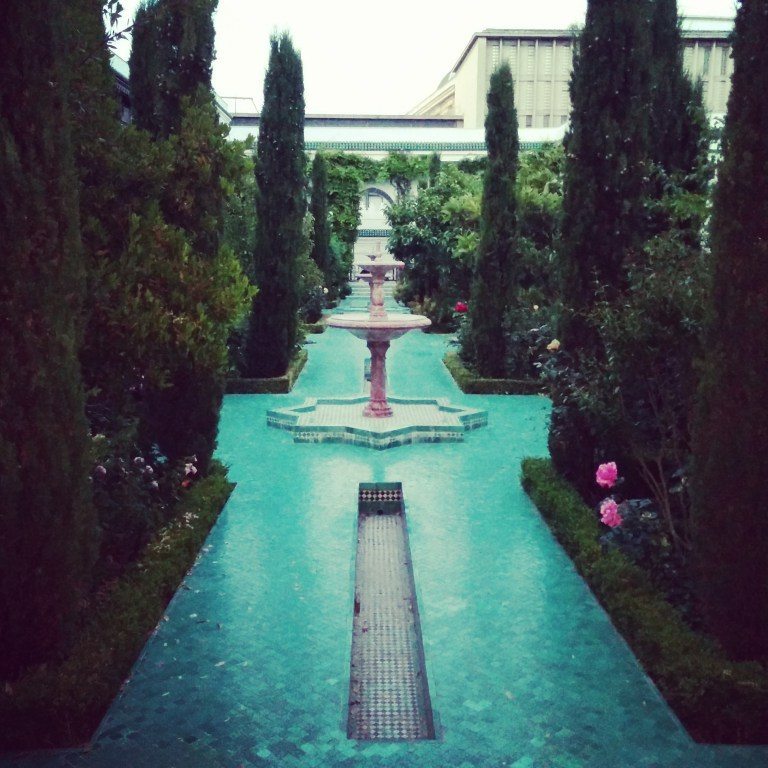 The mosque appears on quite a few tourist guides of things to do in Paris as it also has a Hamam, a restaurant, a café and a Shisha outdoor terrace which are all hugely popular with Parisians as well as some tourists.

The novelty of smoking a shisha pipe or drinking mint tea in a beautiful mosque garden is reason enough to visit – but the role of the mosque during Nazi occupied France makes it a must visit on any itinerary. During World War 2 whilst France was under Nazi occupation the rector of the Mosque Si Khaddour Bengharbit used the mosque as a secret refuge for North African and European Jews – providing shelter, safe passage and forged Muslim birth certificates to protect them from Nazi persecution. Si Khaddour Bengharbit was awarded the highest award in France for his contributions – the Grand Cross of the Legion of Honor. The true story of the mosque’s remarkable role in protecting the Jewish community in Paris is depicted in the great film Les Hommes Libres.

There is something so nostalgic and romantic about old railway tracks and disused railway lines that unfortunately all too often become cornered off or built over. 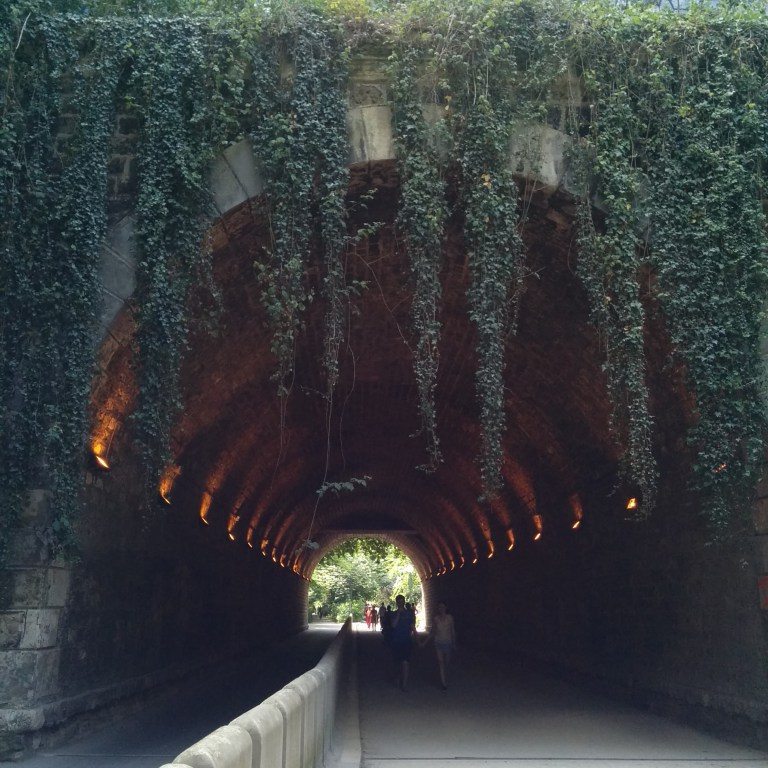 Thankfully the disused railway line connecting Paris to Lyon has been recognized for its potential and parts of this track have been converted into the Promenade Plantee (or as often referred to- Coulee Verte).

Promenade Plantee translates to tree lined walkway – which is a slightly modest characterization as in addition to trees and walkways there are the railway tracks, elevated graffiti lined walk ways, cycle routes, viaducts and beautifully lighted tunnels – pretty much nearly everything that makes me happy.

In my humble opinion, Paris’ Promenade Plantee is much much nicer than the New York highline (so overrated) and was actually the only elevated parkway in the world before the Highline was built.

I absolutely love travelling to places where there is an evident love of food and where whole cultures and social norms are built around an appreciation for food. 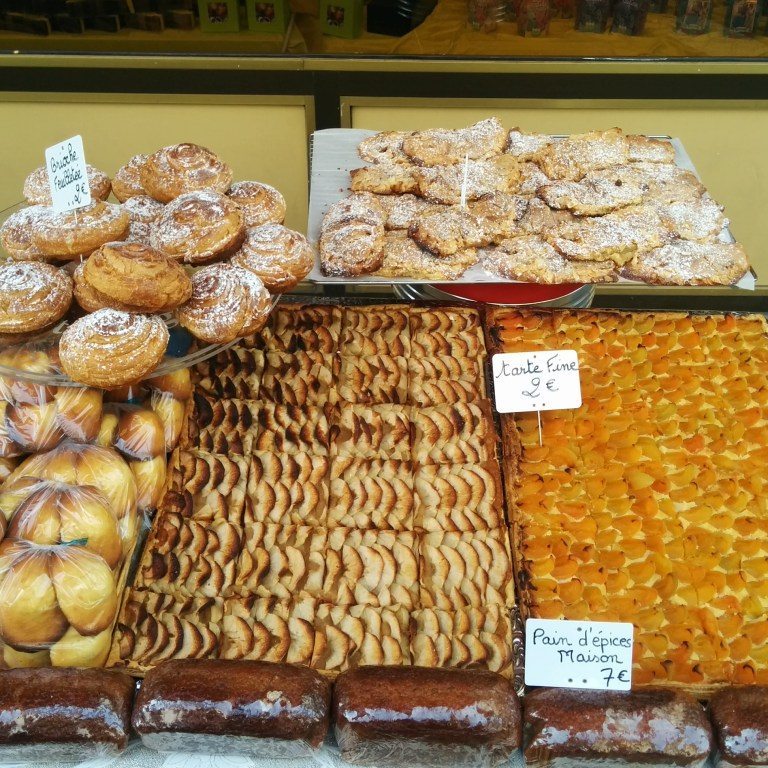 From communal dining, farmers markets, street food, café culture, curb side eating and al fresco dining it really showcases a destination in all its glory and brilliance. Some destinations stand out more than others – Japan must be the most food centered destination in the world and it is evident immediately to any visitor. France and in this case Paris is definitely not too far behind with such an overwhelming amount of patisseries, boulangeries, cafes and restaurants within walking distance.

Freshly baked bread and ridiculously beautiful cakes and pastries at patisseries literally everywhere is something I really appreciate. In fact staying in a hotel in Paris that comes with breakfast would be such a hindrance – just think of all the freshly baked baguettes and almond WITH chocolate croissants you would b
e missing out on (this almond WITH chocolate croissant is such a revelation why has this not gone mainstream, around the world? In London I used to have these from Pod though they seem to have stopped and was nowhere near the level of these croissants available EVERYWHERE in Paris). 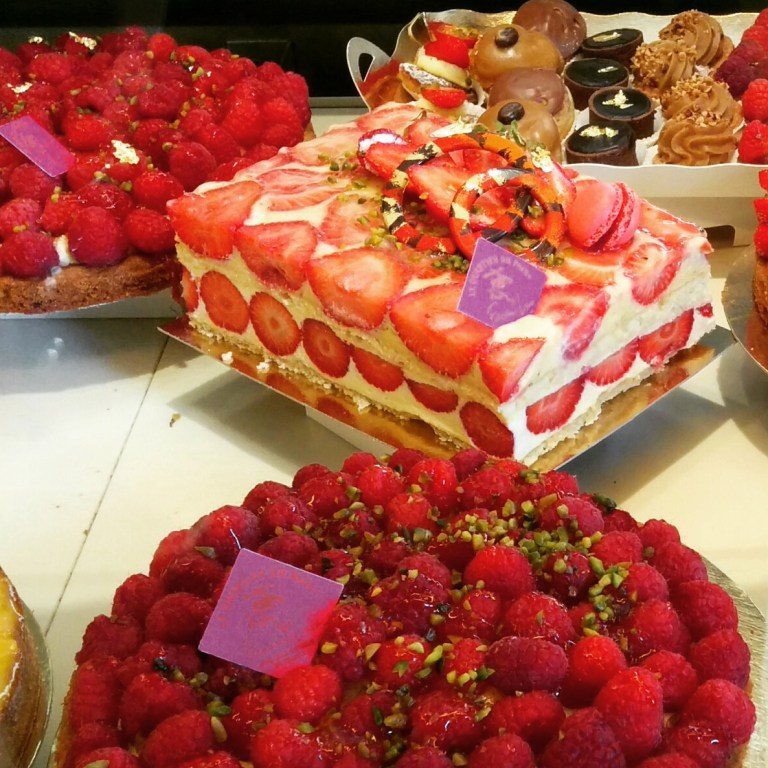 So many streets are adorned with cafes offering outside seating – even the McDonalds on Champs Elysees provide al fresco dining in such lovely surrounds I had to do a double take – Parisians evidently love to eat and enjoy socializing over food whilst people watching (all the cafes chairs seem to be set up to aide this activity with street facing chairs side by side for unashamed and indulgent people watching).

Wondering around the artsy Le Marais area with its multitude of art galleries and boutique shops we came across Les Marches des Enfants Rouges – a large, bustling, covered market with food offerings from around the world, tables jam packed with Parisians tucking into amazing looking food that I actually squealed with delight (and proceeded to judge myself).

The market is the oldest covered market in Paris established in the early 1600’s and its name has the literal translation of ‘market of the red children’ – disturbing right? Well the name comes from the children of a nearby orphanage who were clothed in red – the color of the charity, that’s it – not the morbid back story you expected. The farmers market offers fresh fruit, vegetables, meats, seafood, flowers and cooked food. 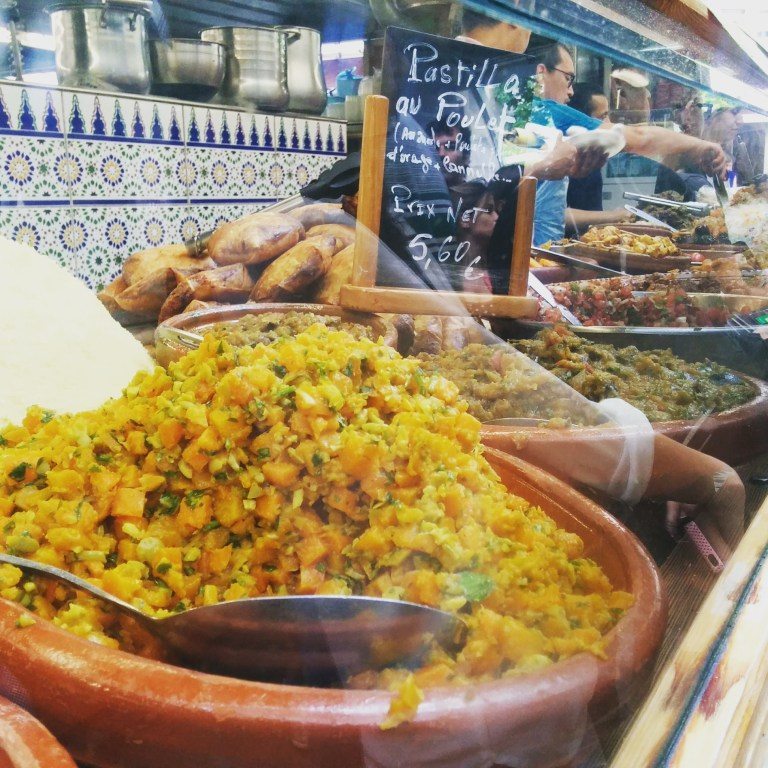 The cooked food counters have their own respective seating areas and on the Sunday we visited was completely packed. Food stall offerings include Japanese food, burgers, Caribbean food, cold cuts, Moroccan food, fish and chips and Lebanese food. The Moroccan food stall was huge, colorful, extremely appetizing looking and had a queue that went all the way round the market.

With such a huge Moroccan Diaspora in Paris you would be remiss not to try any Moroccan food during your stay. We tried the couscous, mergez sausages, chicken and vegetables stew and it was all homemade, fresh and very tasty – definitely one to revisit! 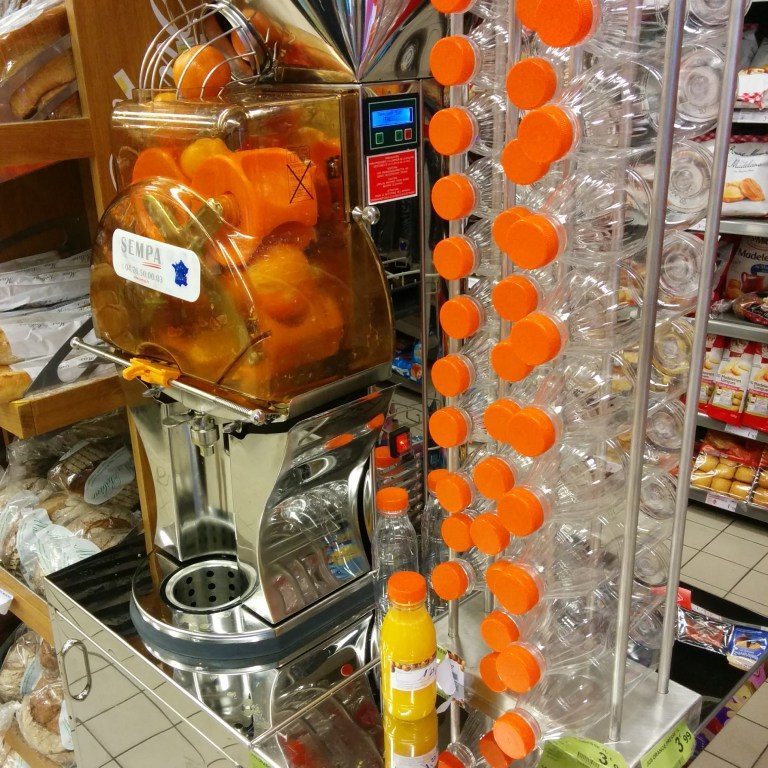 myself to have fish and chips..in France, visiting from England– just ridiculous!

As we are on the topic of food I have to give an honorory mention to the most amazing invention I witnessed in Paris. Anyone who knows me knows I am a sucker for freshly squeezed juice, especially orange juice. France have taken the orange juicing machines one step further and allow you to squeeze and bottle up the juice yourself – ensuring complete freshness and loads of fun (I am easily entertained). I used this machine numerous times in my weekend and genuinely want to look into buying myself one.

So those are my suggestions of 5 things to do for an alternative Paris weekend break – if you have any of your own, I would love to hear them!

Zaynab
Risk consultant by day, foodie and travel obsessive by night working my way to break free of the corporate shackles. Blog charting my epicurean activities on www.somethingtodeclare.net