Around the Muslim World in Food and Recipes

Here is to celebrating, understanding, and appreciating the diversity of the Muslim world – through food!

Here is to celebrating, understanding, and appreciating the diversity of the Muslim world – through food!

In the hopes of celebrating, appreciating, and understanding that the unique diversity of the Muslim ummah is what makes us stronger as a community and not weaker, here is a quick trip around parts of the Muslim world – in food and recipes. Happy eating!

Commonly known as Bosniaks, Bosnian Muslims are part of a South Slavic ethnic group and reside in not only the country of Bosnia and Herzegovina, but also in parts of Serbia, Montenegro, Croatia, Albania, and Kosovo to name a few. With a population of around 2 million, Bosnian Muslims have unfortunately a large diaspora community because of the horrific genocide of the Bosnian War from 1991 to 1995. Despite deep-rooted and generational trauma from such an atrocious tragedy, Bosnian Muslims remain proud of their colorful and unique heritage and culture.

As one of Europe’s largest ethnic Muslim groups, Bosniaks are an important reminder that Muslims have never been an “outside issue” to Europe. Islam, and the Muslims who settled, lived, and contributed to Europe, have for centuries been a part of what makes Europe so European. Here is one popular dish, loved by people from all generations:

This buttery pastry is layered with flakes of pastry, meat, cheese, or spinach all rolled together into a beautiful platter of the best of all textures – crunchy on the outside and soft on the inside, this buttery delight is perfect for all occasions.

Uyghur Muslims are a Turkic ethnic group who live predominantly in the northwestern Chinese province of Xinjiang, although historically they have lived across the regions of Central Asia. Identifying as Muslim with their own distinct culture, language, traditions, and food, Uyghur Muslims have come under heavy persecution from Chinese authorities, who view them as extremists and separatists.

Despite the horrendous human rights abuses from Chinese authorities, the Uyghur community has remained steadfast in their commitment to both spread awareness about their plight as well as keep hold of their ancient and unique culture and traditions. So in the spirit of solidarity, here is one favorite recipe:

A traditional Uyghur rice dish found throughout Central Asia, with a mix of lamb, carrots, and spices – this dish holds both historic as well as cultural significance. Representing the best of the Silk Road and the immense influence it had on the spreading of spices, flavors, foods, and ingredients, this is a must-try dish for one of the best examples of Muslim diversity.

2 Tbsp of oil
5 cloves of garlic
3 small pieces of ginger (peeled)
1 pound of lamb ribs (cut into small pieces)
2 Tsp of salt
2 onions (cut and chopped)
1 pound of carrots (peeled and either sliced or chopped, depending on preference)
2 cups of rice
1 Tsp of sugar
1 Tsp of cumin powder
5 dried chilli peppers
1 Tsp of Sichuan peppercorn

Situated in the middle of the Indian Ocean off the coast of southern India, the Maldives have an almost 100% native Muslim population, with Islam as the state religion. Islam was first introduced to the islands in the 11th century, mainly from Arab and East African traders and merchants. When the Buddhist King Dhovemi converted to Islam in the late 12th century and changed his title and name to Sultan Muhammed Al-Adil, the Maldives was forever changed into an Islamic nation.

Today, the Maldives is often portrayed as an expensive tropical getaway for rich Western tourists. What many don’t realize or see when traveling to the Maldives however, is just how richly diverse, colorful, and dynamic the local culture and history is. From the smaller local islands like Guraidhoo to Hulhumale, staying away from private resort islands is the best way to experience the true culture of the Maldives and interact with the local population. Their history, language, and yes, food are all part of the beautiful example of how the Maldives have long been a hub for the exchange in peoples, goods, languages, foods, and ideas in the Indian Ocean. In appreciation of the Maldives’ often ignored historical importance in the region, here is one of the most loved dishes from the islands:

Traditionally eaten for breakfast with roti bread, this dish is comprised of tuna, coconut, and lime; a perfect representation of the best flavors from this colorful nation. This is a perfect way to understand and appreciate the history and culture of the Maldives – as both at the crossroads of an ancient trading route as well as being a fiercely independent and fascinating archipelago of islands.

Nigeria is home to the largest Muslim population in West Africa, with over 50% of the country’s population adhering to Islam. While the country can generally be split between the Muslim north and the Christian south, Nigerian Muslims have moved and contributed to the country as a whole since as early as the 11th century when Islam was first introduced to Nigeria.

With a fascinating history of ancient trade routes and established hubs for commerce, Nigeria has been a major player in not only connecting the Middle East with North Africa but also with connecting North Africa with Sub-Saharan Africa. From the Mediterranean to the Atlantic Ocean, peoples, goods, religions, and languages have flourished in the country, eventually seeing the monumental rise of Islam within what is now modern-day Nigeria. In celebration of Nigeria’s diverse and layered history, here is one favorite recipe:

Arguably the most-loved of all Nigerian dishes, this rice and tomato-based dish, often served with a side of grilled chicken, is the perfect way to serve a large family or gathering of friends. Although many other West African nations create their own versions of jollof rice, Nigerians proudly state that this is a staple to the country’s beautiful culture of food. 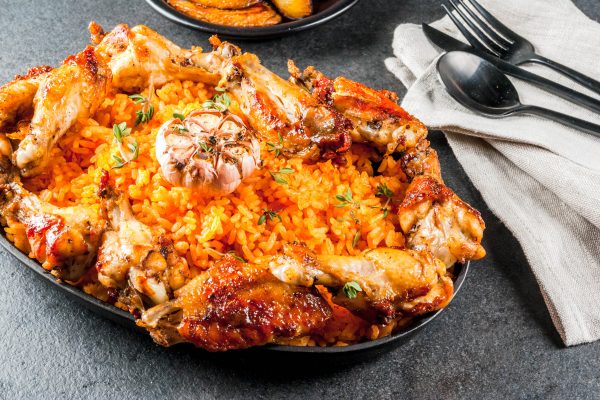 Read more from our Around the Muslim World series, in Cities and Culture, and Sweets and Dessert!