Deen Squad – Bringing the youth back to Islam, one rhyme at a time

Muslims live in a world today where the sociocultural and geopolitical climate has created a sense of fear, paranoia, and mistrust at the mere mention of ‘Islam’; a faith practiced by 1.7 billion of its adherents – and counting! This negative imagery is further lent unjust ‘credibility’ through the irrational demonization of Muslims in the media and the manufacturing of a xenophobic narrative associated with Islam that is conveniently used for ‘points’ in everything from politics to civic life.

In such a landscape of hate and blame, the Muslim youth living in Western countries have long faced some level of ‘identity crisis’ since the tragic events of 9/11. Naturally, this crisis creates a void and a vacuum; one where the need for role models and inspirational figures is crucial for the social contemporary and cognitive development of youth.

In a world where because of this vacuum, Muslim youngsters have had to settle for emulating celebrities; actors and musicians that exhibit everything against the tenets of Islam. Everything from their clothing, lifestyle, speech, mannerisms and the very underlying substance of who they are and what they stand for!

Deen Squad are a prolific group of Muslim artists from Ottawa, Canada; combining the raw essence of the urban rap and hip-hop genre with core Islamic tenets of spirituality and values in the effort to rouse ‘appreciation’ of the contemporary ‘Muslim identity’ in today’s youth and adults alike, whilst negating the many misconceptions the Western world holds about Islam in the media and circles of society.

Lead by the group’s founder and manager Sami Abboud, and armed with unrelenting passion and prodigious talent in the voices of its lead singers Jae Deen and Karter Zaher, Deen Squad has risen from the ashes and reached unthinkable heights with flying colors since its inception just over a year ago! With millions of loyal followers on all spectrums of social media, growing recognition on world media – including stories on BBC and CBC – and a unique ‘lifestyle’ proposition that has sold everything from greeting cards to t-shirts in highly sought after merchandise; the group is making waves for ALL the right reasons. 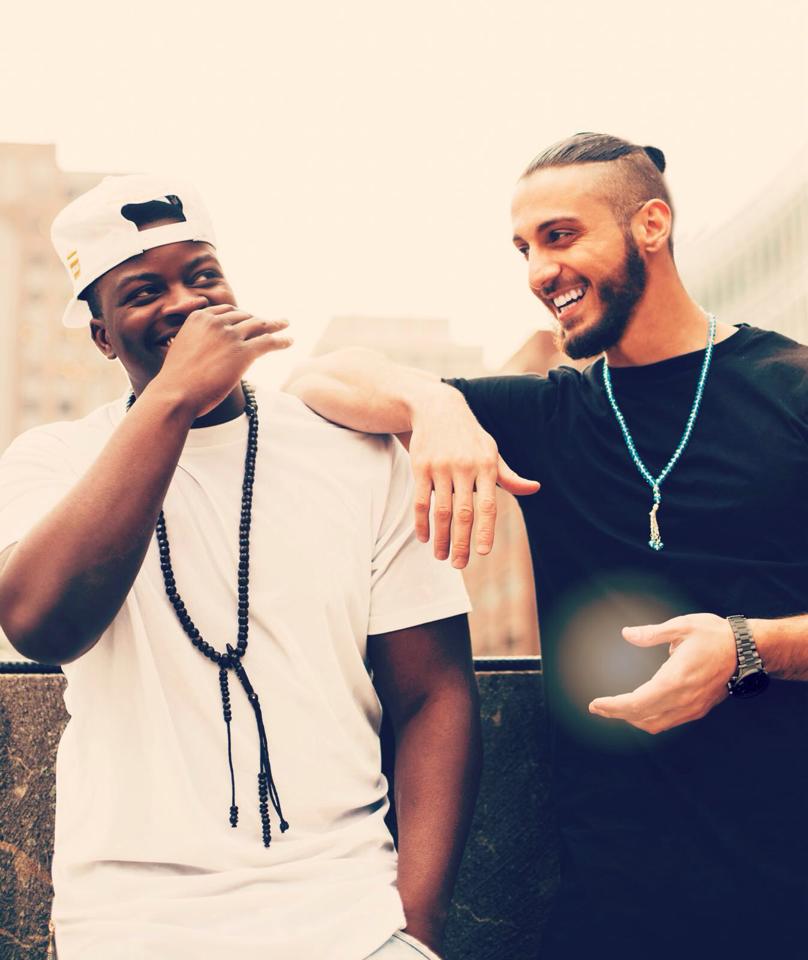 In my candid interview with the boys, I got the chance to learn some of the behind the veil dynamics and struggles that the group has gone through in their journey.

Me: Why believe in Deen Squad and take it at face value?

Deen Squad: “We believe in Deen Squad because it is our means of changing the world and people’s lives. We believe in this movement because of the messages people send us every day saying that their lives have changed immensely after come across our music. There is longevity in this movement. Growing up we never had contemporary role models to motivate us in practicing our religion, which is why we feel the burning void our youth feel in yearning for relatable, accessible and imitation-worthy role models in the realms of social media and entertainment because we have lived the life of never having one”.

Me: You mentioned that people have reached out to you saying how their lives have been changed. Why does changing lives in today’s political and social climate matter from a Muslim perspective anyway?

Deen Squad: “Because striving to guide others is rooted in our religion and was the very essence of Prophet Muhammad’s (SAW) mission, which was to perfect self-character and inspire change in others. We want the Muslim youth to return back to their roots, to embrace their rich cultures, and be proud of their religion as a whole. An overwhelming number of Young Muslims in the West not comfortable with their religious identity. What we convey through our music is that Islam and the good aspects of Western culture are compatible. Be a righteous Muslim and also take pride in the Western culture you are born and raised into. Islam is perfectly able to integrate with the West, without compromising its ideals and values, which is the opposite of the negative accusatory narrative that the media puts out to the masses today, unfortunately”

We’ve all grown up to the ‘idea’ of superheroes; glorifying their feats between the pages of comic books and being captivated by their wonders on the screen. You and me. All of us have! It is in human nature to yearn for ‘contemporary’ role models throughout our lives. Deen Squad has successfully been able to communicate a vision to the masses; a vision built on reformation, action, and gratitude for the sake of the Creator. Their original tracks and remixes have all been created to invigorate the mind and the heart with the spirit of Islam despite the challenges and turmoil Muslims continue to face as an Ummah in the 21st century.

Similarly, the great Muhammad Ali built a legacy throughout his lifetime around his vision of peace, equality, justice, love and understanding devoid of racial, linguistic, religious or political differences between all people, at all times. Today, we remember him for that legacy and his struggle touches the deepest core of our hearts around the world.

Thus, the ability to ‘inspire’ is a very human thing. It is something anyone can do. You do not have to be an international heavy-weight champion or a Nobel prize winner; inspiration resides inside all of us. What matters is how we harness that inspiration and release it into the world in the most beneficial way for all! 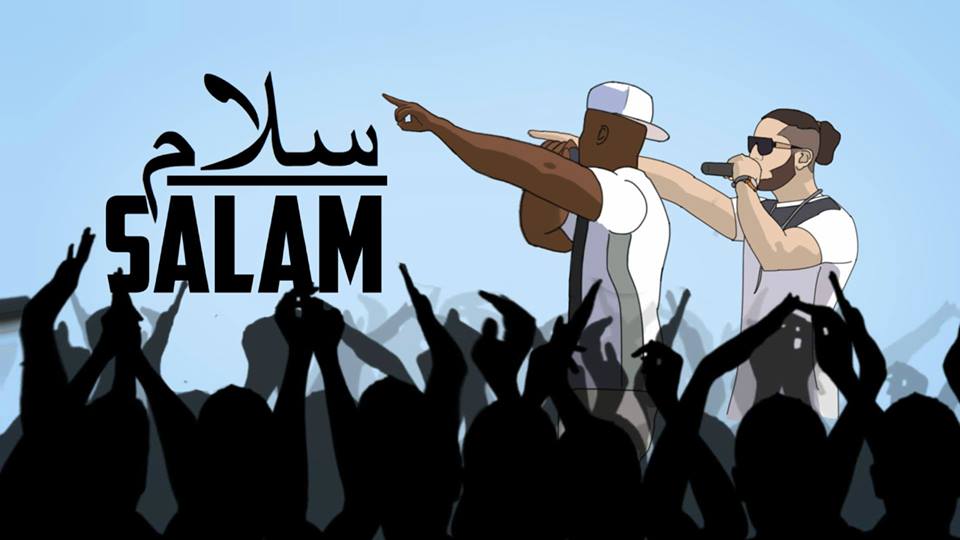 The Deen Squad has garnered somewhat of an iconic superhero imagery for their ever-growing fan following; one that reaffirms the fact that the boys from Ottawa have struck a much-needed chord within the Canadian-Muslim fabric that needed a true calling.

“Interestingly enough, we also have a huge non-Muslim following online and 70% of our merchandise sales come from non-Muslims! This shows that Islam and Muslims can resonate with people from all ethnic backgrounds, religious beliefs and social standings. Deen Squad is not ours to keep. It does not merely belong to Muslims. It is a social aspiration that knows no bounds and is meant for embracing by anyone that believes in virtues of love, peace, understanding and unity; thus proving that at the end of the day we are all children of Adam (A.S) and come from one Creator”, humbly asserts manager Sam Abboud.

The boys have had a roller coaster of a ride in the past one year, shooting from obscurity to stardom in their own right. But none of that came without trials and pitfalls, struggles and sacrifices.

“We’ve sacrificed many things: We’ve had to sacrifice continuing our education and not having the security of promised income in hopes that the rewards of our message and changing lives outweigh the risk and fear of not knowing if we will one day be able to support our families. We are also not working any jobs in order to pursue Deen Squad’s endeavors full-time. Our Manager Sami Abboud has also given up his career and invested all his savings and did whatever it takes for us to pursue our dreams which he firmly believes in till this day. We’ve also sacrificed seeing our families and friends due to constant traveling, but we believe it is all worth it in the end”

Physical, spiritual, emotional, mental and intellectual strength, power and fulfilment lies in utter and complete submission to Allah swt, as we all can agree as Muslims. Living life on His terms. Finding meaning in His will. Discovering purpose in His knowledge. Unraveling happiness in His benevolence. When you ‘sync’ your mind, body and soul to the wavelength of your Creator and tune it to the frequency of His laws – you attain ‘supremacy’ within yourself. That’s what being Muslim is all about. One who submits – unconditionally to the Lord of the Worlds. Perhaps in being a powerful force for inspiration and ‘self-appreciation’ of ‘self-identity’ in pursuit of spiritual and social ‘supremacy’, Deen Squad has galvanized something that we never knew had the potential of making a difference – whether it be to the individual person, the collective community or the human fabric as a whole.

Me: Where do you see yourselves, say 1-2 years from here?

Deen Squad: “We see Deen Squad becoming bigger than it already is now Insh’Allah, more than twice as big, as a solidified global brand with offices in different part of the world, backed up by a team of excellent people who are like minded. This is possible because of our hard work and dedication. With our manager Sami Abboud’s 13 years of rich experience in the music business, we believe it is one of the biggest reasons why we are still moving forward. We want to tour the world in order to meet all the fans who have believed in us from the start and fuelled our passion, getting us where we are today!”

Deen Squad plans on going their first ever Canada-wide tour this October, hitting multiple cities across different provinces and riding the wave of Mercy; a wave they continue crediting to the Creator; a belief they hold pristine to the core values of what the group’s voice is all about.

To find out more about Deen Squad and for all their latest updates, follow them on Facebook.

Editor’s Note: Music is a very sensitive topic in Islam so kindly refer to a trusted scholar on the topic. Furthermore, this post is not an endorsement from The Muslim Vibe

Ali Ashraf
Ali is an aspiring author, an avid foodie, an unfettered dreamer, a wanderlust traveler and an ambitious entrepreneur. He is a syndicated columnist and writer at The Huffington Post, Business.com, Muslimness.com and The Muslim Vibe. Over the past 13 years, his blogs, short stories, political commentary, musings, poetry and articles have encompassed topics from socio-economic, geopolitical, ethno-religious and humanitarian spheres, to short-stories in the genres of fiction, non-fiction and magical realism. His pieces are anecdotal in nature; something the reader can take away from, thus enriching the reader's thought-process with an alternate view to things. A view that is both refreshing and inspirational. His eventual goal is to one day publish his works as a collage of anecdotal pieces, reaching out to audiences of all demographics devoid of political or religious differences. He believes that: “Words have a special place in this world. They have tremendous power to implement change; change within ourselves and to the mosaic of life that we see around us” When his pen is not consuming empty pages, Ali can be found at the squash court in the middle of an intense provincial-league match, taking long quiet walks to contemplate the mysteries of the universe or looking up new ways to grow his communications coaching and copywriting business for entrepreneurs and online companies.

What is Persian Classical Music Worth in the West?

The Shia Voice: An Overdue Celebration of Shia Culture (Review)