The Alchemist Experiment : Does a book read the same the second time around?

Perceptions have always fascinated me. They are so intricately complex, unique and dynamic that it seems nearly impossible to accurately understand or study what an individual is truly feeling at a given time. What is even more fascinating is that individuals themselves might not be able to precisely say what it is that they are perceiving right when a sensation occurs. Keeping in mind the fact that how we react to different events is highly influenced by our state of mind, our past experiences and our memories, I wanted to perform a simple experiment in which I would be my only participant. The idea was to pick a book I read years ago (preferably a book that would have moved me enough for me to roughly remember what I had felt while reading it) and to read it again in order to compare its effect on me. Quite a few books met those criteria and I decided to choose a book that would most likely deliver insightful reflections on my changing personality. I therefore chose The Alchemist.

I don’t remember everything about my first reading of the Alchemist but I do remember the circumstances in which I read it. I had bought the book in London on a rainy summer day and had started it once I came back home to Paris. I remember having started the book the very night I had reached home.

For a long time I remember The Alchemist being the only book that actually made me travel physically. Many of it’s passages struck the deepest chords within me and I remember having experienced something quite unique while absorbing each and every sentence Coelho had written.

During those days, I had just gone through my first year at university. My personality was evolving every day. I had encountered new friends, was studying in a new neighbourhood, and was going through a perpetual re-discovery of my own faith and principles. I was interested in almost everything at that time. I was born into a traditional Muslim family. My parents used to visit the same mosque every week and I had grown up knowing the same people. That year though, I remember having discovered new mosques and met people who followed different schools of thought within the Islamic faith. I had visited churches and various other places of worship. At that time, I was seeking knowledge in whatever form I could. I was so curious and eager to learn that anything I was exposed to for a long enough time was either learnt or assimilated. I was exposed to photography and it led to me buying a camera and learning that art. I was introduced to the Persian language by some Iranians friends, and having fallen in love with its sound, I started learning immediately. Come to think of it, that time was perhaps the most appropriate for me to have read The Alchemist.

For a long time I remember The Alchemist being the only book that actually made me travel physically. Many of it’s passages struck the deepest chords within me and I remember having experienced something quite unique while absorbing each and every sentence Coelho had written. The Alchemist had become my favorite book. I used to praise it’s genius wherever I could. I used to quote its passages in casual conversations. I used to offer this book on birthdays and special occasions. If The Alchemist was a religion and Coelho its prophet, I had become its most ardent believer.

Close to 10 years between my first reading of the book from the current one, a lot has changed. I have changed. The world has changed. And it would have been foolish to think that I would have appreciated the book the same way I did the first time.

The book wasn’t loved by everyone. I don’t know whether there is any link between the two, but most people who didn’t feel the same way about it were older and more mature people. I remember telling myself that their pessimism was the reason behind themselves not enjoying the magic of it’s writing. At that time, I thought you could only appreciate The Alchemist as an adult if you kept a positive outlook towards life.

A few weeks ago, I started reading the book again. My encounter with the book was a mere coincidence. I had started following someone on social media and that person had a picture of The Alchemist with a famous quote (‘Maktub)’. Close to 10 years between my first reading of the book from the current one, a lot has changed. I have changed. The world has changed. And it would have been foolish to think that I would have appreciated the book the same way I did the first time. 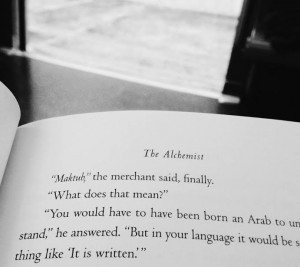 Upon re-reading this novel from the very copy I bought in London, memories of my first reading emerged very vividly. I could sense the same thrill I had felt when I had first read the famous ‘Maktub’ passage. Other conversations were still able to move me and to make me fly to distant lands. Although I did experience similar feelings and emotions to those I felt when I had read it the first time, I could feel a distinct taste of bitterness that wasn’t present when I had first read it. It’s as if the Chemistry with the Alchemist was still there, but some other ingredients made it taste slightly different. It now tasted just different enough to know it wasn’t exactly the same. It’s true that the book still made me fly, but I wasn’t flying very high. Perhaps, years lived constantly surrounded by adults who do not always say what they mean and do not always mean what they say had hardened my mind, making it less suitable for flying.

I have also appreciated re-reading the book for it made me nostalgic. Regardless of its ability to generate mature and distinct feelings I could appreciate within me as an adult reader, I could always enjoy the book for the way it reminded me of what I had felt back then. In other words, I also enjoyed re-reading the book for it reminded me of who I was. I reconnected with my lost innocence. I bonded again with a familiar unfading positivity. I met a young and shy teenager, always eager to learn and to discover. At times, instead of appreciating each sentence I was reading, my mind was busy trying to remember what it was thinking when it had first read the very sentences it was looking at. Although our emotions often go back to valleys they once knew by heart, our intellect does not often consciously wander in their own previously performed cognitive processes. Perhaps, the awareness required to understand how an emotion rises is a demanding task and often a superficial one. Most of the time, what matters to us is what that emotion was able to trigger at that given moment. In my case, a great deal of pleasure experienced upon re-reading The Alchemist came from recalling each sentence that had made me fly. Some sentences had made my heart beat faster back then and it was literally a thrilling experience to feel my heart reacting the same way upon re-reading them.

I also enjoyed re-reading the book for it reminded me of who I was. I reconnected with my lost innocence. I bonded again with a familiar unfading positivity. I met a young and shy teenager, always eager to learn and to discover.

I have to admit I did not read the entire book this time. But I have read enough to feel satisfied. I am glad I re-read it. Although it is always a tough realization to come to terms with ones own changing personality, I obviously was aware of not being the teenager I once was. The question that comes to my mind, is whether I would have liked the book today if I had read it for the first time. If I were to discard the nostalgic pleasure that was partly the reason behind me appreciating this second reading, would I still appreciate The Alchemist?

I would like to think that it would. Perhaps not in the same way. If I were to appreciate a book the same way I had when I was 10 years younger, that would possibly be problematic, as it would mean that none of my previous experiences, travels, friends had an impact on my personality and life.

I am sure this isn’t the last time I will read The Alchemist. In a few years, I will grab the same book I had bought in London on a rainy summer day and start reading it again passionately. If not for the thrill of flying high like I did the first time, I will read it to entertain whatever part of innocence there will be left in me. You need some innocence to appreciate The Alchemist, for without it, ‘Maktub’ will still sound like a foreign word, but it will fail to make you travel to foreign lands.