Teaming up with Cancer Research UK, both the British Islamic Medical Association (BIMA) and the Muslim Council of Britain (MCB) have launched a campaign to bring awareness to Muslim communities across the UK on the importance of checking in with the NHS about cancer screenings.

There will be a series of talks throughout the month, discussing both the importance of cancer screenings as well as being individually diligent about the dangers and symptoms of different cancers. This can be especially important for women, who make up the majority of those affected by the three cancers covered under the NHS screening processes: bowel cancer, breast cancer, and cervical cancer.

Last year’s campaign saw over 30 talks held around the country, and this year BIMA is aiming to increase the reach of this campaign to benefit even more people

By raising awareness, these three major organizations hope to both destigmatize what cancer really is, and help bring more people together to take the necessary screenings to help either prevent or appropriately deal with potential cancers. 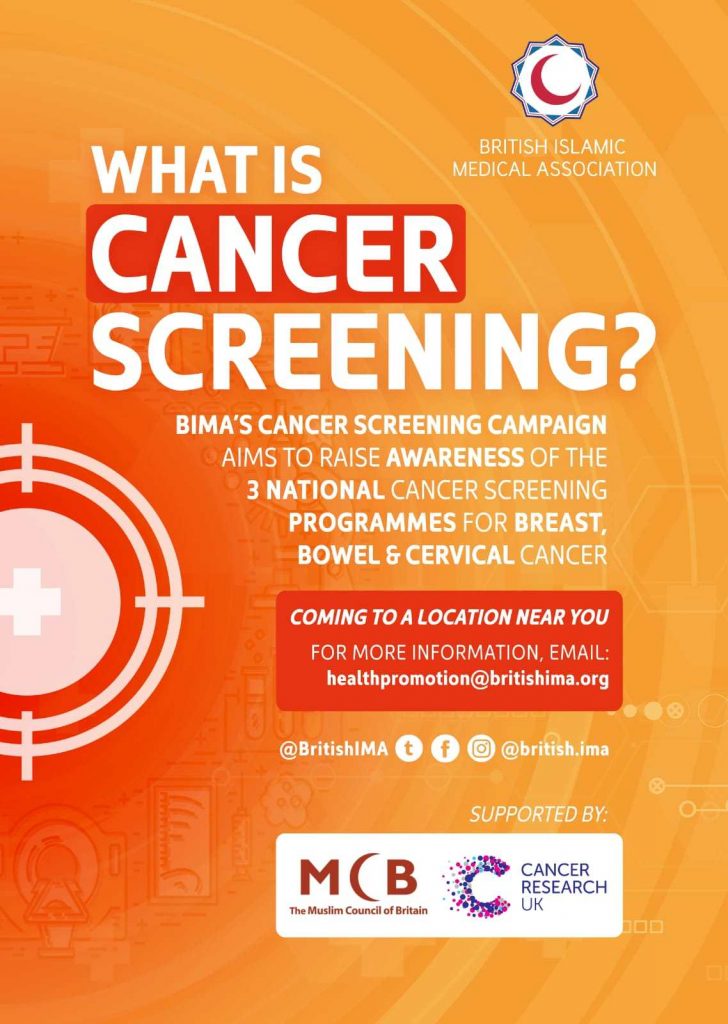 As the overall number of cancer screenings still remain worryingly low among Muslim communities, BIMA and MCB hope that this month of campaigning will bring more people together with both the NHS and Cancer Research UK.

“There is evidence that suggests cancer screening uptake in Muslim communities is worryingly low, yet we know cancer incidence is on the rise. It’s vital that we encourage our communities to take proactive steps to protect their health, explore reasons for low engagement, and address any concerns they have around the screening tests and process.”

Harun Khan, Secretary General of the MCB, says, “The Muslim Council of Britain is delighted to support BIMA and CRUK in this important project.  Making healthcare services more accessible to our communities is a role we take very seriously, and with recent studies showing one in four people will be diagnosed with cancer in their lifetime, catching it early is essential to improving survival rates.  We encourage all of our affiliates to take advantage of this programme and book a speaker today.”

To book a free BIMA speaker to come to your institution or organization to give a talk on the importance of cancer screenings, click here.

To learn more about the British Islamic Medical Association, a democratic and national organization that aims to unite, inspire and serve Muslim healthcare professionals in the UK, visit www.britishima.org.

To learn more about the Muslim Council of Britain, the UK’s largest Muslim umbrella organization with over 500 affiliated national, regional, and local organizations, mosques, charities, and schools, contact them at [email protected].