This food delivery startup is helping to feed hungry kids, 5 meals at a time

‘Tis the season for giving back. Delivery startup Sharebite, already known for donating one meal to hungry children with every order placed on its platform, is kicking it up a notch.

This month, co-founders Mohsin Memon and Ahsen Saber launched a “million meal mission.” The goal, they say, is to donate five meals for every one order that is placed on the Sharebite app. That means all of you Seamless and Grubhub users who don’t feel like running out for lunch during your work day can do some good if you switch over to Sharebite.

If 1,000 orders are made per day, Sharebite can share one million meals with kids in need. That’s not a far fetched goal, Memon says, considering N.Y.C. typically sees 300,000 delivery/take-out orders per day.

I followed up with Memon, a former banker with Bank of America Merrill Lynch, since the mission kicked off to learn more about the Sharebite business model and what inspired him to start the company in the first place. 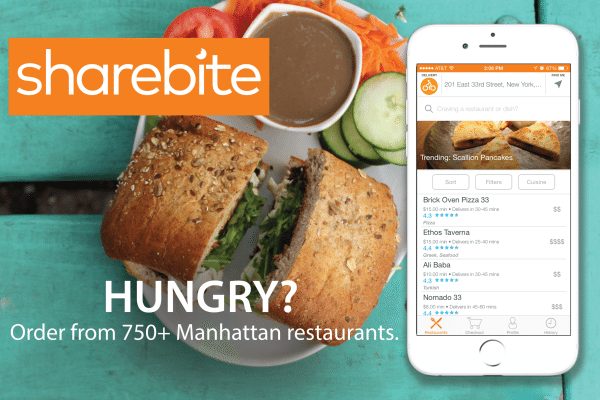 How has Sharebite grown since it launched last year?

Last year, we did a pilot launch — a feasibility run. We received a very strong response so we scaled it up.

After launching the app last year, we decided to invest in a web transactional platform. We also added another thousand restaurants, doubling it in New York City to over 2,000 restaurants. We’re still in our infancy, but growing very quickly since we rolled out the website.

We also have our “million meal challenge” kicking off for the holidays. Originally, we donated on a one-to-one model. We actually donate at least one meal through CityHarvest. Now, we thought let’s make more of an impact and donate five meals for every meal ordered. That’s our mission for 2017. The holidays seemed like a good time to do it.

The restaurants pay 10 to 15 percent in commission. We’re giving it back through our fees from the restaurants. CityHarvest gets 23 cents to cover the cost of one meal. In this case, five children are being fed with $1.15 from us. So while you eat, you can “take out” hunger. You can order from 2,000 local restaurants, either pickup or delivery, and be a part of the community experience. Our users post pictures, rate dishes, and receive referrals from friends and neighbors. You also see what’s trending around you. We’re enhancing the ordering experience, but with a social mission.

Where are the meals going?

Throughout New York City. We work with CityHarvest, which has a huge logistics network. They work with food banks throughout New York. All the kids being fed are right here. That’s one of the things we wanted to focus on. We were taken back when we learned that one out of four kids faces hunger in New York City. It’s the richest, wealthiest city in the world, and it seems strange that this issue is right here in our backyard. That’s why our focus is here rather than elsewhere.

How does the service differ from other meal delivery startups?

As meal providers, we’re focused just on the restaurant industry. We’re the only socially driven food delivery platform. Our goal is to feed a million children, expand our user base and, unlike the competition, we don’t spend much on marketing. We’re getting a lot of new users through word of mouth, either in friend or work circles. The company really registers with New Yorkers, especially millennials.

What inspired you to start the company?

Through a private equity firm I was working with, I ended up working with Icon Parking, the largest parking business in New York City. Before 2008, there was more demand than supply. But after the financial downturn in 2008, things changed and the parking industry needed to enter the tech space with mobile apps. I helped Icon make that happen. Tech can make a big impact on a sector that traditionally doesn’t rely on tech. The same goes for the restaurant sector.

I came about Sharebite accidentally. I volunteered for CityHarvest and I became aware of the hunger issue and thought, “How do I make an impact here?”

I also read a book by Toms Shoes founder Blake Mycoskie called “Start Something That Matters.” He talks about finding a social cause and creating a sustainable solution to that problem through a noble business model. I looked at the restaurant space and realized there’s an opportunity here. So Sharebite combines my desire to work on child hunger as well as working in the food sector. I was motivated by Blake and what he did with Toms.