Understanding that one voice does not speak for all, and that African-American Muslim women have their own stories to tell, is what needs to be heard.

Understanding that one voice does not speak for all, and that African-American Muslim women have their own stories to tell, is what needs to be heard.

Why are African-American Muslims being left out of the conversation?

What conversation, you ask? The answer is all of them.

When you turn to your favorite news channel for discussions on Islamophobia, what do the pundits look like? When you see the latest viral rant about police killing African-Americans, or not being convicted of murdering African-Americans, what do the ranters look like? Neither of these situations provides that voice or the imagery of the African-American Muslim even though Islamophobia and driving while Black are among our greatest trials. Everyone else seems to have all the solutions to our ills, but our voices and our imagery are involuntarily mute.

This is unfortunate in so many ways. We have several people that are close to the problems that are working on a grass roots level, daily, to provide better solutions. All of the people of whom I speak

It’s a trifecta in which takes a strong character and foundation to live and thrive. Not only are all three being oppressed in the US, but the trifecta means you have to prove yourself more.

Malcolm X was an African-American Muslim male. If he were alive today, he’d probably have continued to be called upon to speak and be the voice of not only the Muslim Community but also African-Americans as a whole.

In America, leadership has always been looked upon as a white-Christian-male role. In Islam however, even from the earliest teachings, women have taken the reigns. Khadijah, Fatima, Maryam and Asiyah, wife of Pharoah, were all great leaders and teachers and are known as the four great women of the Quran. There is a significant legacy of African-American non-Muslim women, from Harriet Tubman to Michelle Obama, that have been magnificent leaders and teachers. So ask yourself, why, in the 21st Century, can’t we mesh the two or even three trifectas? What makes being so inclusive invisible?

The following seven Muslim women told their stories to radio host and activist, Jenny Triplett, along with her husband and co-host Rufus Triplett, in a Black Muslimah Activists series on Prisonworld Radio. 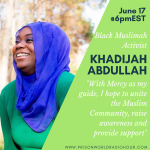 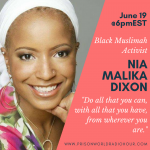 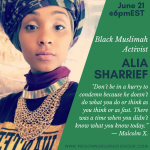 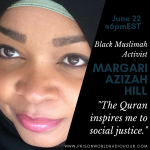 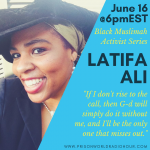 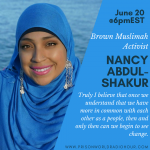 The Muslimahs gave quotes as to what activism meant to them, and also talked about the challenges they face, pretty much on a daily basis, about being respected as an African-American Muslim woman. Two of the sisters, Hazel Gomez de Crain and Nancy Abdul-Shakur, are Latinas, but are included in the struggle as the very things that oppress us are the very things that unite us.

A piece by Essence Magazine on those women that are doing the most for the “Stay Woke” movement is just a taste of how our non-inclusiveness speaks to the masses. When you don’t include us, we see why. We see that you are lacking the education and understanding needed to be inclusive. Yet the diversity clause of the mainstream media does not go deep enough down the rabbit hole. We cannot be sorry for that, so no apology is offered. But what is offered are these seven wonderful shows, by seven highly active and engaged sistahs in the struggle. These series streamed on Prisonworld Radio for seven nights. You can listen to it in its entirety, using the above links, in just seven hours.

Understanding that one voice does not speak for all, and that African-American Muslim women have their own stories to tell, outside of beauty and fashion, is what needs to be heard. How loud do we get? Well that depends on the ones who remain insolent.

We shall overcome some day. We gone be alright.

Oh, excuse the phrases, that’s just the blackness coming out of the struggle.