“The energy, emotions, and themes of Riz Ahmed’s words are ever resonant with these times, and we’re delighted to be able to continue our journey with this extraordinary performer.”

Actor, musician, and activist Riz Ahmed has announced a one-off live-stream performance of The Long Goodbye on the 19th of December this year, as part of a companion piece to the live stage show commissioned by Manchester International Festival (MIF) and Brooklyn Academy of Music (BAM) – originally scheduled for March 2020 before the COVID lockdowns began.

Riz Ahmed is a musician, actor, and activist – first coming to the spotlight as the first South Asian actor to win an acting Emmy for his lead role in HBO’s The Night Of. He has also starred in Rogue One: A Star Wars Story, Venom, Four Lions, Nightcrawler, and the final season of the HBO show Girls.

Ahmed’s career in music began in the London music scene as a rap battle champion, later writing and performing as a solo artist and as part of Swet Shop Boys. Ahmed’s provocative solo released titled Post 9/11 Blues was banned before a viral groundswell forced it onto radio in the UK. His Swet Shop Boys album has impacted activists around the world – most notably when protestors against US President Trump’s “Muslim Ban” chanted the lyrics at Los Angeles International Airport.

The Long Goodbye is Riz Ahmed’s most recently acclaimed album, which takes an intimate look into the breakup of a toxic relationship between oneself and the country one lives in – this online live-stream performance will be an emotionally charged blend of storytelling, music, archive footage, and immersive sound to fully guide the audience through Ahmed’s album.

Performed by Riz Ahmed, the show was directed by Kirsty Housley with creative direction from Andrea Gelardin and sound design from Gareth Fry. The performance will be live-streamed on Saturday the 19th of December 2020, presented by WeTransfer – tickets will go on sale via mif.co.uk on Tuesday the 1st of December.

This online companion performance will be a very different experience to The Long Goodbye live stage show which we are planning to bring to Manchester next year, but the energy, emotions, and themes of Riz Ahmed’s words are ever resonant with these times, and we’re delighted to be able to continue our journey with this extraordinary performer.”

In addition to this performance, Mongrel Records has also released a brand new Riz Ahmed track called Once Kings, produced by Ben Khan and CID RIM. Once Kings incorporates exclusive clops from the highly anticipated new film Mogul Mowgli, with archival footage from Riz Ahmed’s own childhood as well. 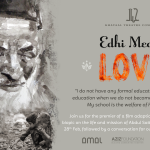