When you mention New York City to someone, there never seems to a shortage of superlatives to describe possibly the most famous city in the modern world. The jagged skyline is familiar to even the most infrequent traveller, as it is its main artery; The Hudson River.

The familiarity continued as I traipsed across block after block, with a sense of déjà vu at so many of the landmarks I came across. “I’m sure I saw this recently” I said to myself, as another iconic New York sign flashed across my memory. I had seen it before, in the perfect placement of Hollywood’s most impressive film sets. In my 48 hours in the ‘Big Apple’ I came across many more movie references that came as a surprise, even to a film-lover like me. 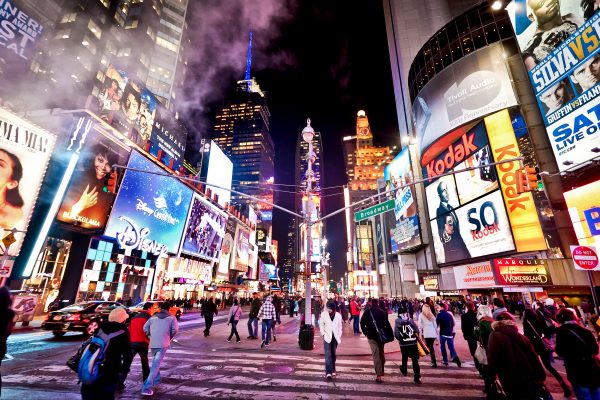 It was day 1 and 8.30am was breakfast time. New Yorkers love food. I’m serious; it’s a fascination here. Everything is big. Super big. I don’t mean large, I mean humongous. I headed to a nearby coffee shop for a freshly baked bagel and New York style ‘cawfee’. With car horns going ten to the dozen in front of me, I unwrapped my lox bagel and stared at my oversized map of the city to get myself oriented. It’s not too difficult, as everything is in a grid system, but planning a route is well worth it, as with all large cities.

New York is split into five distinct areas; Manhattan is the London equivalent of zone 1, with Brooklyn and Queens to the east, Staten Island to the south and the Bronx to the north of the city. After the last few bites, I folded my map and headed off to the nearest subway station.

One of my friends had said to me “You must go to Grand Central Terminal, even if you’re not taking a train”. I’ve heard Grand Central is known for its architecture, but really the same could be said about St. Pancras. On my last visit to London I didn’t see hordes of tourist ogling the ceiling; all while being barged out the way for the 14.39 to Bedford. I had to see what all the hype was about for myself, so I duly headed to 42nd at Park Avenue. 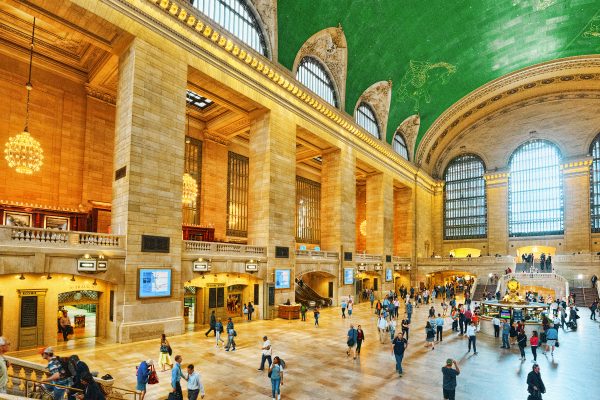 Walking into the main concourse was like entering a 1950’s movie filmed in sepia, with shafts of light gleaming through the vast windows stretching 38 metres above my head. As the largest train station in the world, spanning 44 platforms, it’s more like a small airport than a train station. As a major commuter hub, Grand Central Terminal never sleeps, and although I wasn’t actually taking a train from here, the nostalgic traveller feeling remains as it probably felt like when it was built in 1871.

Although the concourse is the perfect setting for a romantic rendezvous under the perennial clock meeting-place, the list of movie links that spring to mind in the Great Central Terminal is pretty long, including I am Legend, The Taking of Phelam 123, and the epic chase in Carlito’s Way.

As the clock struck midday, I was off to my next stop; the Metropolitan Museum of Art. Located on Fifth Avenue, “The Met” is an immense building with towering columns guarding the impressive façade and a 400m long interior filled to the brim with some of the world’s most unique collections. Inside you’ll find one of the world’s finest Islamic art collections, as well as one of the most extensive Egyptian collections outside of Cairo and countless European paintings and sculptures.

With a wealth of museums to explore in New York, including the American Museum of Natural History (inspiration for Night at the Museum), Soloman R Guggenheim Museum (Men in Black), and the New York Public Library (remember Ghostbusters?), there is no shortage of must-see places for knowledge seekers.

The sun was setting on day one of my New York odyssey, and of all the iconic tourist buildings in the city, there is only one you really need to make sure you get to the top of. The Empire State Building, on a clear night is the perfect opportunity to see the rest of the city blend slowly from dusk to darkness. After the hour long wait, the observation deck from the 86th floor is simply breath-taking, and worth every second waiting in line. 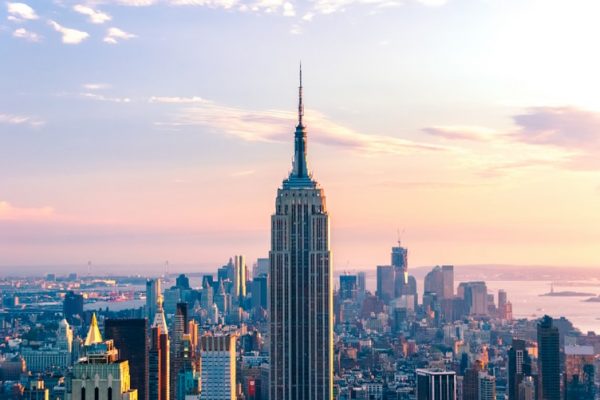 The building itself it pretty historic in its own right: opened in 1931, it was considered an architectural feat far beyond it’s time. Ironically, despite the ground-breaking engineering and the stunning Art Deco styling, it was the movies that cemented my desire to see this monumental building for real. From the 1980’s Superman II to Hancock and of course Sleepless in Seattle, the backdrop of the Empire State Building is often a repeated set for Hollywood. If you want include the tallest building in New York in your holiday snap, then go to the ‘Top of the Rock’ at the Rockefeller Centre with an equally impressive view of the city.

A full 12 hours later it was 8.30pm and time to return to the frenetic city streets. After a long day pounding the blocks, which, by the way, are longer than you’d think, it was time to find a place to relax and sample what New York is all about: pizza. The local ‘pie’, as it’s called, has many fan favourites, and choosing one of all the recommendations was an impossible task. 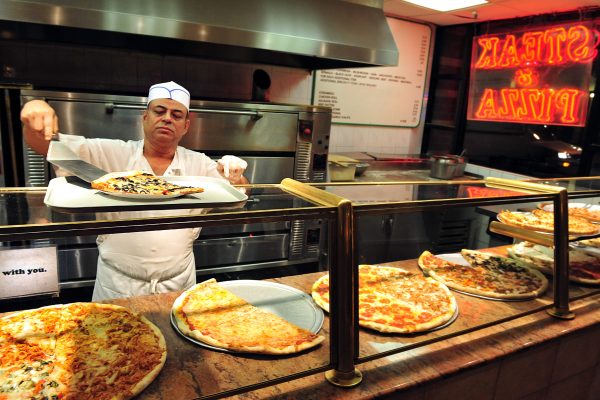 As finding an authentic halal pizzeria was somewhat tricky, I decided to head to Café Viva on 97th and Broadway, which specialises in vegetarian pizzas. The carnivorous New Yorkers might not agree with the ethos of a vegan pizza, but it was good enough for me and the veggies.

Already 24 hours in, the next morning I felt the need to escape the city. The sun was shining once again, and after picking up what felt like a litre of latte, I jumped on the subway and started my second day of sightseeing. The subway is by the far the cheapest and easiest way to get around the city, and although the harsh plastic seats are not easy on the eye, the Subway is an icon of New York all on its own.

A single journey will cost $2.50 (£1.55) and a seven-day pass is a steal at $29 (£18). Another great way to see the New York skyline is on the water, and taking the Staten Island ferry is a great way to commute in New York. Even better, the ferry is free, and once on Staten Island you can escape from the hustle and bustle of Manhattan, where life slows down a little.

The other must-see when in New York is the Statue of Liberty, and whilst getting up close and personal on Liberty Island is an option, the best vantage points are Brooklyn Bridge or from the Staten Island Ferry. Once you arrive at the St George Terminal, you can visit the Staten Island Zoo take a bike tour or visit the Blue Heron Park. Alternatively, take a walk along the boardwalk and take in the view across the river, without spending a cent. 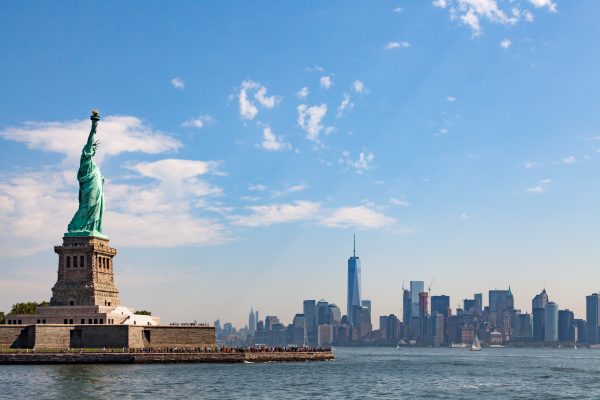 It was mid-afternoon as I headed back into Manhattan, and it was time to collect a few souvenirs. I decided to head along Fifth Avenue, doing a spot of window shopping in Bergdorf Goodman, Saks and Bloomingdales. Macy’s synonymous with Miracle on 34th Street is a must for any department store addict, and you can pretty much spend a whole day browsing its 1 million square feet of shopping space. I was off to relive a bit of my childhood at FAO Schwartz, the world’s oldest toy store. The giant piano which featured in the 1988 Tom Hanks movie Big is still there, with people young and old flocking to tap away.

One of the most unusual phenomena to occur in New York street food is the Halal food cart. The one I’m referring to is also known as the ‘Halal Guy’, the ‘Chicken Gyro Guy’ or just ‘The Cart’. So many people seem to know about it and rave that it is a must-do on a visit to NYC. So I headed to 53rd and 6th to find out if it really lived up to expectation, passing by the ‘imposters’ on my way. The 35 minute wait was apparently modest as I chatted to a few guys in the queue.

The halal street food carts have grown in popularity as migrant workers relied on cheap eats on the go, however the unique taste of the dish virally spread to office workers, with even tourists coming to sample the gooey smorgasbord of what is, quite honestly, an unhealthy combination. It was one for the road, I said, as I tucked into a combination of gyro (what we know as shawarma), rice, a secret white sauce and pitta bread served in an aluminium tin.

This particular combination seems to be a popular choice here, although perhaps not too good for my health-conscious diet. The reality here is that it’s so good to see that a small street cart called “The Halal Guys” have made the top 5 favourite eateries on Tripadvisor in a city so deeply rooted with Islamic negativity in recent times.

No visit to New York is complete without experiencing a local game, whether it’s baseball, American football, or my personal favourite, basketball with a bird’s eye view of the Knicks at Madison Square Gardens. The NBA franchise is one of the richest in the world, and getting to the game early is a chance to soak up the atmosphere and watch the venue fill to the rafters.

The game was intense, and even from so high up, watching the ten players flit end to end was worth every minute. As the game ended, the crowds dispersed and I headed to my hotel to pack up and take the red-eye back to London. Although a fleeting weekend break, the city that never sleeps never made me feel like sleeping. I will certainly be back for more movie nostalgia and another round of gyro.

New York is a year round destination, however compared to the UK, it has searing summers and harsh winters. Either way, the city keeps functioning and the winter season is one a personal favourite time to visit

There are numerous places to pray in New York, although they can be spread out as the city is quite large. Serendipity Tailormade provide a Halal-Friendly guide to New York for every booking in the ‘Big Apple’, detailing mosques and halal restaurants.