The refugee crisis revisited one year on – what’s changed?

“One year on and Lesvos is still suffering.”

“One year on and Lesvos is still suffering.”

It was a year ago that I first stepped foot in Lesvos, Greece. I was there as a medical volunteer, and yet the first thing that struck me as I stepped off the plane was the stunning natural beauty of this small idyllic Island. The drive from the airport to the hotel meandered through the mountains, streamlined by the sea; the sun glistening. My mind wandered to Mediterranean holidays advertised back home and then it hit me… The reminder of why I was there. Washed up flimsy dinghy boats and life jackets lining the shores. Men, women, children and the elderly could be seen walking to get to nearby camps. Some had walked for days by foot to flee their war-torn countries and then made the dangerous journey by boat. Crammed together into the dinghy, no idea of when or where they would reach; stranded on the sea in complete darkness. Clutching to each other for comfort, praying to reach safely; hoping for a better life. Not all of them would make this journey, dying from hypothermia, infections or other medical conditions. What’s more heart-breaking is that many would drown…

For those that did make it, their immediate future was bleak. More hours of walking to the nearby refugee camps, waiting for days in inhumane conditions for a bus ticket, endlessly queuing for a ration of food and water. Along the route many will encounter threats of physical abuse, rape and child trafficking. After days of waiting and reaching the front of the bus queue many were turned away only to be told the bus ticket they had spent their last pennies on is a fake; they must start the entire registration process again. For those lucky few that managed to get a bus ride to the ferry port, they’re met with more waiting and queuing in the freezing cold before boarding the ferry to Athens. This first stage marked the real start of their long journey to freedom.

Forever etched in my memory is the deep pain and fear I witnessed in the eyes of these refugees; fear of the unknown and what the future would hold. Pain from the exhaustion, pain from having left all of their belongings, and in many cases family members; pain from losing close ones on this horrific journey; pain in the eyes of mothers seeing their babies being buried; pain in the eyes of fathers who could not feed, clothe or shelter their family and children. Yet even in these incredibly difficult circumstances they stoically carried a smile on their faces, endlessly thanking the volunteers for their efforts. One young girl came back to see me, to hold my hand one last time and to say “I love you.”

It was heartwarming to see the selfless spirit of volunteers from across the world. Volunteers of all ages and backgrounds had given up their time to help, leaving their daily lives behind; many of them had not booked a return ticket. They were not fazed by man-made language barriers or religious barriers or cultural barriers; they communicated through the language of moral values; of love and unity; of community spirit. Everyone enthusiastically giving their time and energy to uplift and support the refugees in any capacity they could. Volunteers were dispersed – rescuing and helping the refugees at the shores, distributing food, blankets, clothing, providing medical care, helping with burial rites to creating children’s play areas – yet their hearts beat as one.

Based in the medical camps, I saw many suffering due to the unhygienic conditions, the bitter cold and the unmonitored chronic illnesses. More worryingly, I saw acute cases of adults suffering from seizures, severe infections, bullet wounds, interspersed with lethargic young children being brought in from capsized boats. As our trip came to an end, memories from the scenic route now haunted me… More shoes and socks of young children were washed up on the shores, pictures and identification documents forever lost or discarded – a collective memory of a past they wished to forget. And yet more dinghy boats were coming in… 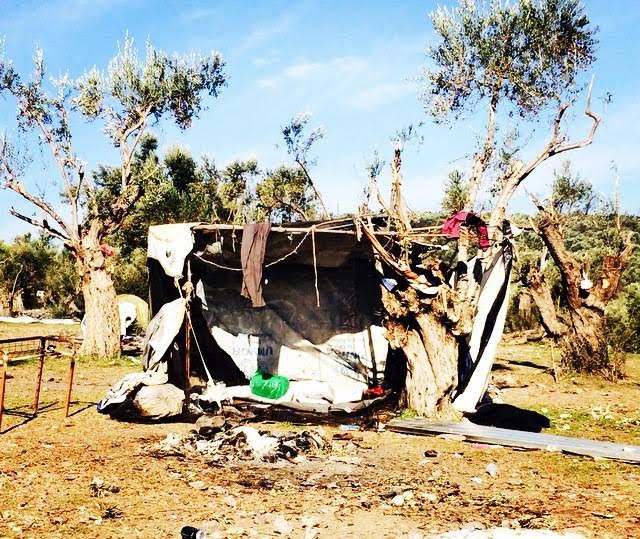 One year on and Lesvos is still suffering. According to the Greek Reporter, on Tuesday 20th June 2017, the island was struck by a 6.1 Earthquake that caused 1245 buildings to be damaged, with only 547 deemed inhabitable. It’s another insult in a long line in a sequence of tragedies this small Greek Island has had to endure. From seeing refugees drown crossing the sea, to impoverished famished children being rescued by lifeboats, Lesvos has had to bear all of this with a heavy heart. Just last month, 91 new refugees arrived, seeking asylum from the terrors of ISIS and the bombing of Yemen. According to the General Police Directorate of the northern Aegean, as of Tuesday 20th June, there were a total of 8,600 migrants on the islands, in camps and other structures. The irony that Tuesday 20th June was World Refugee Day was not lost on the Aegean Sea – on the same day the earthquake rocked the nation, more news rocked the hearts of the world with UNHCR reporting three shipwrecks and fears that 130 people were dead.

Lebanon has taken in an estimated 1.5 million refugees, amounting to almost a third of its total population, with 70% still living below the poverty line according to UNHCR. Are we doing enough? It’s never too late to help, and there’s plenty more for us to do. Charity Refugee Action has highlighted some steps we can take: