Four reasons why Osaka is the food capital of Japan

Osaka, Japan’s second largest city and one of the most culturally unique places within Japan, is easily the best place to eat. There are many things that make Osaka different from the rest of the Japan: from the unique dialect of Japanese that is spoken and comedic attitude of the city, to the layout of the tangled city and history of the people, Osaka is undoubtedly very special from the rest of the country.

However, the one thing that will always remain as one of its best features is the food. Osaka easily surpasses the often cold and robotic restaurants of Tokyo and prides itself in being a city completely obsessed with food. The entire language of Osaka is based on food. The amount of words used in our language to describe the texture, taste, sound, and color of food is uncountable.

Osaka is stuffed with restaurants and food stalls; most streets are filled with the sound of food frying, steam and smoke from barbeques, and smells from the delightful mixing of different dishes of food. The reasons why Osaka is the food capital of Japan are endless. But to make it simple, here are four main reasons why the food of Osaka is truly worth traveling for.

Takoyaki is sold on almost every major street in Osaka, and is the most popular street food that originated in the city. Takoyaki is also the pride and heart of Osaka. It’s basically small ball-shaped fried dough batter, stuffed with your choice of octopus, tempura, or even cheese. It is then lathered in a rich, savory sauce and topped with a layer of Japanese mayonnaise. The best way to eat it is Osaka-style, where you can squat or sit on the ground next to the food stall and eat it like a true local. Also, the takoyaki must be piping hot in order for it to be truly delicious to locals.

Okonomiyaki is another example of Osaka soul food, and it’s common for entire families to go out and enjoy the perfect okonomiyaki for a late dinner. Okonomiyaki is a large, fried cabbage pancake, made with a flour and egg batter. It is usually fried right in front of you on a large teppanyaki, or hot plate. The name comes from the word “okonomi”, which translates roughly to “how you like it”. This is because you can choose from an endless list of what kind of ingredients and flavors you want in your okonomiyaki.

You can have it stuffed with seafood, with vegetables, with cheese, with mochi (sticky rice balls), or with whatever you’re in the mood for. To finish preparing the dish, okonomiyaki is lastly covered with a dark savory sauce, topped with Japanese mayonnaise, and sprinkled with powdered seaweed. Although other cities in Japan have tried adapting okonomiyaki and added their own twists to this dish, it is originally from Osaka and remains one of the most loved dishes in the city.

Yakisoba is the common comfort food of Osaka, with each mother in the city having their own version and style of making this dish of fried noodles. Restaurant yakisoba is just as good however, and a restaurant meal is not a meal without a side of yakisoba when you go out with friends or family. It is basically a dish of fried thick noodles, mixed with savory sauces, aonori (powdered and salted seaweed), and seafood or vegetables. The real way to eat it in Osaka is to fry it enough so that the bottom layer of noodles are crispy and almost burnt. The texture of yakisoba is what locals love the most, with the perfected balance of chewy and crispy that has become so unique to the yakisoba in Osaka.

Eating kushikatsu is an experience of its own, and is one of the fun ways to spend an evening in Osaka if you really want to get to know the culture of the city. Kushikatsu is associated with the older and grimier parts of southern Osaka, which means the restaurants serving it will have more character, the people will have a stronger Osaka dialect, and of course the food will be more delicious. 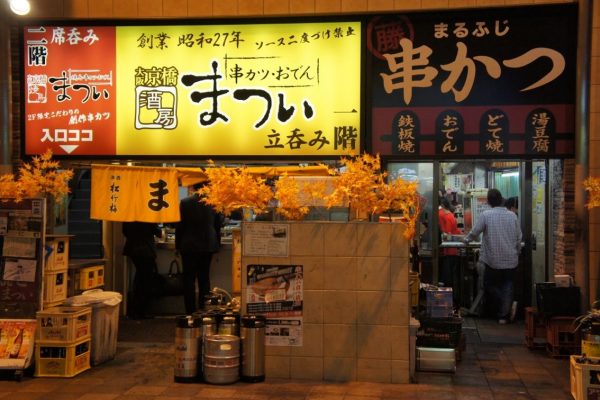 The food itself is simple: it’s fried food on a stick, which you then dip into a delicious sauce and eat. But it is also so much more than that to locals. Simpler foods means better company, and the people of southern Osaka know this and celebrate it.

You can choose whatever food you want fried, from meats and seafood, to vegetables and tofu, to cheese and rice balls; almost anything can be made into kushikatsu. Everything is fried on a stick, so it’s easy to eat and talk your way through the night. The restaurants are always busy, crowded, and littered with sticks of fried food being carried and flung everywhere. Laughter and people yelling out orders are comfort noises for anyone who loves the experience of kushikatsu. For a true Osaka experience, eating out at a kushikatsu restaurant is a must!