From rotis to ramparts : A culinary journey across Sri Lanka

Everything grows here, from vanilla pods, cinnamon sticks, nutmeg and even cacao, and the aroma of spices pleasantly surrounds you as you walk through the fragrant trees.

Everything grows here, from vanilla pods, cinnamon sticks, nutmeg and even cacao, and the aroma of spices pleasantly surrounds you as you walk through the fragrant trees.

The little island of Sri Lanka has suffered many fates over the past thirty years, however emerging into a blossoming period of prosperity, the pearl of the Indian Ocean is relishing its new found limelight as a travellers’ paradise. Nabeel Shariff takes you on a gastronomic journey of this unique and amazing country:

The first time I met Walter he was standing with an intense look on his face in the arrivals hall at Colombo airport. He’s around 5’2, greying, and in his early 60’s with a belly to boot. From the moment he greeted me, he had this gentle yet mischievous aura about him, and I knew we would become pretty good friends by the end of the trip. We headed to our vehicle and in the still-humid air we began to get acquainted. He asked me if I was hungry, and I said I had slept most of the journey so a definite yes, and with that we headed into Colombo as the afternoon rush hour peaked.

Walter said to me that for this evening, the best way to get over a long trip is to relax with the ocean breeze, and a short walk from the hotel a vibrant open space appeared. The Galle Face Green is where locals meet in the evening to have a natter, bring the kids to run around, and get some yummy street food. The food vendors line up along the sea facing promenade, with a collection of what Sri Lankans call ‘short eats’, or snacking foods. 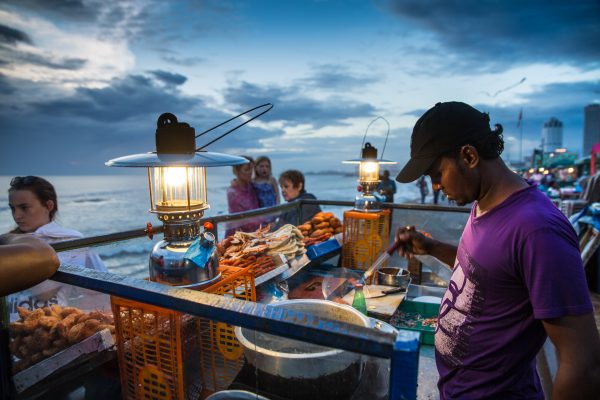 Rustic cabanas are set up each day with a selection of unique and unusual delights, and as you peer through the perspex, you realise a need to satisfy your curiosity with a bit of everything. The halal vendors are easily recognisable, either by the appearance of the vendor, or the halal sign stuck on the cart. No trip to Galle Face Green is complete without tasting the rarely found isso wade, a deep-fried lentil patty with three shrimps wedged into the top. The real pleasure of eating isso wade or anything else here is to down it right there and then, getting a little bit messy in the process.

The next day we left the hubbub of Colombo for the rural interior of the country. The greenery of this island is always around you, with trees bearing all types of fruit lining the busy roads. As we headed towards the Pinnawela Elephant Orphanage, we stopped by one of the many pineapple sellers on the way. Whilst in Sri Lanka, you will be spoilt for choice by the array of fresh, organic fruits and vegetables available.

Walter had a favourite stop on the route, and as we pulled over a mother and daughter were sheltering from the midday sun, under their thatched roof stall. They carefully sliced an unusually large pineapple to go around, and as with many things in Sri Lanka, eating it right there is the only way to go. After paying the kind lady for her hospitality, we continued to the elephant orphanage, a conservation effort designed to rescue baby elephants orphaned in the wild. 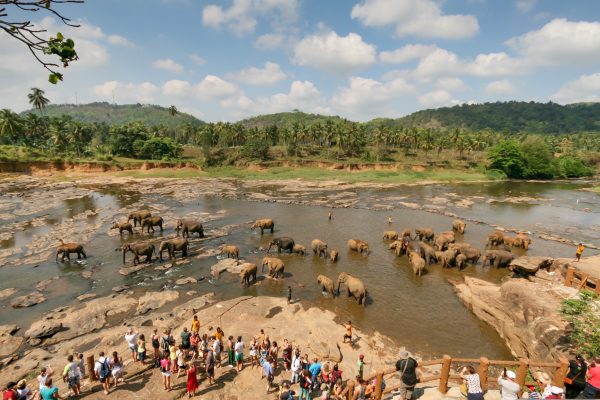 Although domesticated and unlikely to return to the wild, Pinawella plays an important part in rescuing elephants that would’ve ultimately suffered a ruthless fate fending for themselves. The baby elephants are what everyone wants to see, as they amble clumsily down the dusty track and splash into the cool Maha Oya River.

The next few days of the journey took me to Habarana, part of the cultural triangle which encompasses the sacred Buddhist sites of Dambulla, Annuradhapura, and Polonnaruwa. Our base was the Cinnamon Lodge, a quiet and stunning hotel located on the shores of the Habarana reservoir. Early mornings and late evening are best experienced by climbing into the tree houses to watch the birdlife in their most active state, the local macaques run the gauntlet, and the sun sets across the shimmering lake.

The next day we visited the impressive Sigiriya Rock, a 370 metre high rock outcrop formed into a fortress by the ancient King Kashyapa. Dating back to the 5th century BC, myth has it that the side of the rock was carved into the shape of a lion’s head to ward off potential attackers. The King decided that the top of the rock would be his fortress, and by enduring the 45 minutes climb (if Walter can do it, so can you), you can witness the impressive engineering feat and the unrivalled views across the green savannahs. 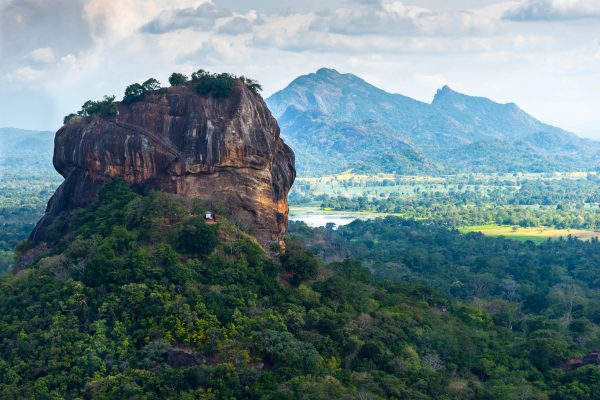 Leaving Habarana, we headed south towards Kandy and onwards to tea country. Our food experience turned to the raw ingredients that are imperative in making great Sri Lankan food, as Walter planned a stop at the spice gardens in Matale. The experience was more of an education  on where everyday spices we take for granted are actually grown, some on the ground, some in the trees, and some as flowers. Tall canopies provided much-needed shade as we walked around the tropical gardens as the growers showed us their crop.

Everything grows here, from vanilla pods, cinnamon sticks, nutmeg and even cacao, and the aroma of spices pleasantly surrounds you as you walk through the fragrant trees. After stocking up on a few fresh spices for my trip home, I definitely understood more about the key ingredients when it came to whipping up a Sri Lankan rihaala meal with a cookery experience at one of my hotels during my trip.

We drove through the city of Kandy, home to the main Buddhist temple in Sri Lanka; the Temple of the Tooth. Kandy is also home to many Muslims, and as today was Friday we stopped to pray at the Grand Mosque. Afterwards, Walter told me that the Muslim diaspora in Sri Lanka were famed for their biryani, and of course I had to duly test this claim for myself. 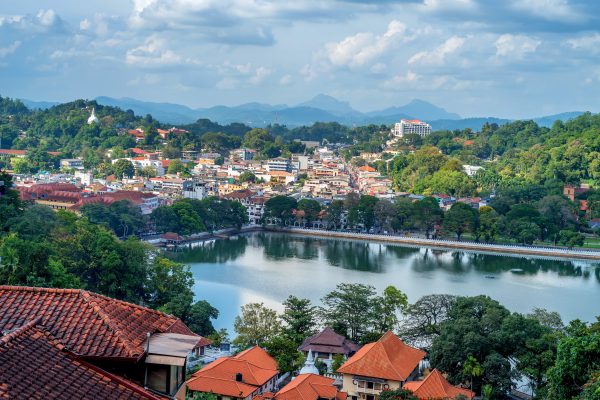 Being the day of Jummah, there was no shortage of vats full to the brim of simmering biryani. A plate-load was brought to our car, and we simply tucked in as we paid a couple of pounds for a filling lunch. The blend of spices reminded me of a Malay biryani, but spicier (as many foods in Sri Lanka are). Due to the mix of cultures in Sri Lanka, many Muslims are descendants of Arab traders (Moors), Malay, and Indian ancestors.  The 10% of the population that are made up by Muslims are well established in Sri Lanka, with mosques in the majority of places you would visit.

Heading into the lush green hills, we left the tropical heat of Kandy and made our way up to the cooler hill country of Sri Lanka. The temperature drops from a barmy thirty degrees to fourteen, making Nuwara Eliya and the surrounding countryside ideal tea growing conditions. We stopped at a local tea factory to see how a blend is made, and with so many options, the possibilities are endless.

The tea in Sri Lanka is picked by hand, by an army of ladies with large baskets hooked over the temple, as they expertly pick the ‘green gold’ one by one. It’s a tough job; with acres of tea, it’s amazing that a traditional method is still used, however it is the only way to ensure buds are not damaged as this affects the quality of the taste. 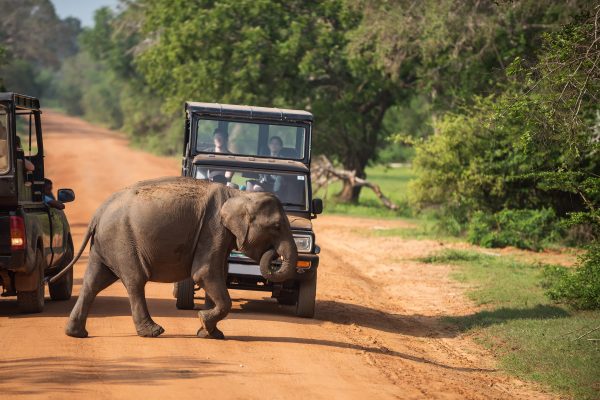 The next morning we headed south and downhill to Yala National Park. We spent a couple of days out on safari in what I would say is the best wildlife experience outside of Africa. We spotted the stealth-like Sri Lankan leopard on a few occasions, a real treat to any wildlife enthusiast. With blue whales also common off the southern coast, Sri Lanka is the perfect safari experience without bursting the purse strings.

Departing from Yala, we made our way along the beautiful coastline past Hambantota and Tangalle, and made our way to Galle. The fortified Dutch city was ravaged during the tsunami and many lives were taken for those not protected inside the ramparts. Wandering the streets, I couldn’t help but stop and chat to a few locals about their experiences, which they were more than happy to share. Whilst reminiscing, we tucked into some of Sri Lanka’s favourite street foods: the hopper and kotthu roti.

These native dishes are iconic across the country, and are the ultimate street food. The hopper is a thin lentil pancake shaped into a bowl and then served with an egg, onion sambal, chilli, or even curry. The kotthu roti maker blends rhythm and cooking, as metal cleavers bouncing off the griddle tap in tune with whatever is playing in the background, and the spectacle is often the centre of attention as people line up for a portion of chicken or vegetable kotthu.

With so much to try, Walter, me, and a few other locals sat down on the ramparts overlooking the Galle Bay sharing the food around we bought, including fish curry and giant grilled prawns like I’ve never seen before. Local kids dived off the rocks into the open water, showing why people here are generally happy. The island mentality has been restored since the end of the troubles, and Sri Lankans are better-off for it. If you visit this beautiful island, you’ll see some jaw-dropping vistas, but the most amazing of all are the people and the food that has fed them for generations.