Black Friday. You may be familiar with this term already, if not, here’s a quick summary. It’s a day on which people desperately hunt for discounts on second-rate products they do not need – leading to people losing their dignity and human values.

I remember the first time I saw a video of a Black Friday brawl, I was horrified and appalled. 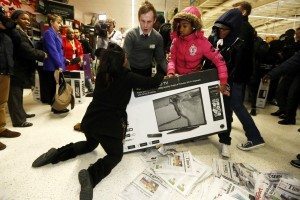 I struggled to understand how human beings could stoop to such a level, that they would be willing to fight over a TV screen (over a electronics brand no one even knows!)

After hours of sifting through countless videos and images of Black Friday, I concluded that this phenomena is nothing short of a twisted capitalist ritual and sick social experiment.

The greatest irony comes from the fact that Black Friday is traditionally marked the day after Thanksgiving Day in America – which in its own right is a twisted celebration. The day is celebrated as a day on which Native Americans welcomed European immigrants to their land and helped them, only later to be massacred by the very same people they welcomed.

Real history aside – Americans celebrate this day with family and friends and use it as a day to give thanks to one another and be thankful for everything they have. Yet the very next day (and now even at midnight), thousands head to stores to clamber for products and bargains they do not need. Go figure.

So why do I think this is a twisted capitalist ritual and sick social experiment?

The way that Black Friday has been set up is designed to dehumanise and humiliate the poor and desperate working class in society. The way in which news reporters cover the events of the day by referring to the bargain-hunters as ‘consumers’ sounds like commentary on a wildlife documentary. With scenes of grown men and women fighting each other, and even grabbing products from the hands of young children – sadly, animalistic is a term that becomes apt.

But whilst we can easily (and rightfully) condemn people for the way they act in such brawls – it is clear that this is a symptom of a much more severe sickness in our society. Greed. We live in a society which is dictated by capitalist ideals in which the more we have, the better we are.

Our values as human beings have been skewed, and material wealth is how we judge success and happiness. And in this dark pit of capitalist greed, the gap between those who have and those who don’t is growing at an alarming rate.

This leads people who find themselves at the bottom of this giant pyramid scheme desperate to try everything and anything to increase their material wealth – even if means fighting someone.

The sad thing is, that most of the products sold on Black Friday are items large corporations are desperate to get rid of; cheap and outdated products which even on-sale are probably overpriced. They even wrap products and place them in a way that encourages people to tear, grab and be aggressive. They literally want people to act like this as it creates hysteria around their brand. It is sickening and shameful.

I imagine that on Black Friday, the ruling elite sit there rubbing their hands with glee, whilst pointing their fingers and laughing at the masses who are prepared to sell their own dignity to profit of corporations who see them merely as ‘consumers’. The frenzic scenes and profits recorded on Black Friday act as a measurement for a sick social experiment we have all been chained by in one way or the other. 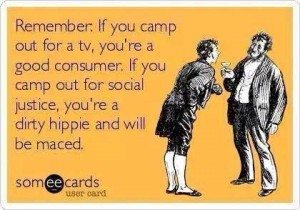 The ruling elite have created a model which does not require them to force us to do anything – they simply use our primitive human instincts (such a greed) against us. We have been socially engineered to seek material wealth and associate material gain with happiness.

Sadly, we are none the wiser when we allow ourselves to be manipulated, controlled and humiliated. We must resist the temptation of the material world, in order to prevent it from owning and destroying us. We are more than consumers, we are human beings with dignity.

“O believers, let not your wealth nor your children distract you from remembrance of Allah. Those who do so, they are the losers.”  – The Holy Quran (63:9)