The Paradigm Shift: Why Is Atheism On The Rise?

In the UK, the 2011 census data showed that the number of people who described themselves as having ‘No Religion’ increased from 15% to 25%, in the 10 years between 2001 and 2011. And more recently, a British Academy Research Project in January 2018 found that based on weighted data from 13 online polls, the figure is actually closer to 40%.

So atheism is on the rise, right?

Atheism is not the same as having no religion, sometimes called “unbelief”. In fact, there’s a whole spectrum of views – or lack of views – when it comes to belief in God. According to Humanists UK, the following definitions around the concept of “unbelief” may help:

There are no definitive figures on how many people describe themselves under any of these categories, which are themselves not mutually exclusive.

In previous articles, we touched on how books by people such as Richard Dawkins – a prominent atheist and patron of Humanists UK – have contributed to increasing skepticism towards religions, whilst advancements in science and technology appear for many people to be more ‘rational’ and ‘intellectual’ approaches to life than the belief in ‘old scriptures’ of religion.

However, these factors assume that most people have actively thought about the relevant topics around “what is truth”, considered the pros and cons of the main arguments around the existence of God, and arrived at their chosen conclusion with firm conviction.

Sadly, this is largely not the case.

I believe most people are so distracted from considering the questions of “what is the truth?”, that they unconsciously follow what their family, friends or society is believing at the time (and this applies to both those who describe themselves as religious or otherwise).

Distracted by what? The materialist consumerist lifestyle of society around us, which encourages us to believe that greater consumption equates to greater happiness, that “owning” better things is our aim in life, and that constantly pre-occupies us with wanting more.

And when we are so busy pursuing our happiness in these ways – buying a bigger house, finding a job with a higher salary, upgrading to the next smartphone – perhaps we lack the time and interest to consider the bigger questions in life. In short, we don’t care, as we’re too busy trying to enjoy our lives.

The values of a consumption-centered lifestyle dominates our lives, from the way the success of our nation’s economies are measured in GDP (Gross Domestic Product – implying the more we produce, the better we are), to the advertising industry which specifically targets children as young as 2 years old to start developing ‘brand loyalty’.

Even those who believe in religion themselves have been sucked into this paradigm. For example, for the two largest global religions, many people would consider: 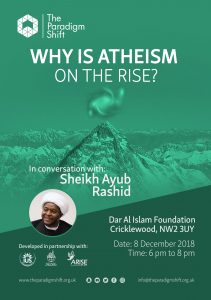 Given these phenomena – and when religion itself is being subjugated by the values of materialism and consumerism – is it surprising that more and more people are finding less relevance in religion in living their lives today?

Perhaps because theists themselves have lost a true understanding of what those values are, other values have taken their place.

“Why is atheism on the rise?” in conversation with Shaykh Ayyub Rashid, will take place at the next The Paradigm Shift event on 8th December 2018, 6-8pm. For more information visit www.theparadigmshift.org.uk.

A Conversation on Growth-Focused Relationships (Part One)