Perhaps instead of contributing to the terror, anxiety, and fear of those most affected when hatred raises its pale head and claims the innocent among us, it might be sufficient to focus on supporting the victims of hatred and on keeping our names out of their supplication.

Faced with the recent, unpredicted wave of escalations of hatred, violence, and threats to our safety and security, we are attempting to manage responses to the activities of white supremacist organizations and emboldened individuals who are determined to inflict harm and release the paralyzing venom of fear into the hearts of the most vulnerable.

Black Muslims, along with other communities of color, are experiencing concurrent escalations of terrorist threats from militant organizations, “lone wolves”, and even state-sponsored violence. As a result, the targeting of Black lives by domestic terrorists only serves to magnify the traumatic effect of the current climate of intolerance on Black Muslims and the Black community at large.

Fundraising campaigns, such as the one started on June 10, 2017, not the platforms that host them, that ostensibly seek to placate anti-Black and anti-Muslim hatred through misguided gestures of medical altruism only serve to demonstrate how little Black and Brown lives are thought of (or thought about) by certain groups among our non-Black co-religionists.

To treat the lives of human beings with such disregard simply to test a theory that maybe, just maybe, an avowed white supremacist with a track record of hate won’t respond in kind by using his newly supplemented resources and a healthier cardiovascular system to further white supremacy is despicable and dangerously myopic. Do we really want to be complicit in indirectly strengthening his organization, who through his renewed health may embolden his followers and ramp up campaigns of terror against Black, Brown, and Muslim populations? I pray the answer is a resounding NO.

The argument that an individual or his organization is not actively oppressing or terrorizing anyone, smacks of a paternalistic regard cloaked in spiritual sanctity that tells Black people “we’ll tell you when you are being oppressed; we’ll let you know when to cry out in pain; we’ll tell you who your enemies are and how you may react to those that threaten your loved ones.”

Do not be mistaken or misled, we are clearly, absolutely, and unequivocally enjoined by our beloved Prophet Muhammad (upon him be peace) to help those who are engaged in oppression by restraining them. Speculative sentimentality and the nobility of redemptive intentions aside, we take our direction regarding oppression and liberation from the Prophet (upon him be peace):

We are also clearly and unequivocally enjoined to alleviate the suffering of the oppressed and align ourselves with their struggle against transgressors:

A Muslim is a brother of another Muslim. (So) he should not oppress him, nor should he forsake him (i.e. when he is being oppressed).”

There are clear injunctions in the Prophetic example and admonition directly from our Prophet (upon him be peace) regarding the treatment of those who engage in or support tyranny and oppression:

The Messenger of Allah commanded us with seven things, one of which is: ‘Support the transgressed.’”

Those who are aware of oppression and do nothing to restrain it are likely to be punished along with the ones intentionally and actively engaged in oppression:

When people see an oppressor but do not prevent him from (doing evil), it is likely that Allah will punish them all.”

Even those who assist an oppressor by justifying or rationalizing their oppression risk the anger of Allah. One of the Companions of the Prophet (peace be upon him), Abdullah ibn Mas’ud, is reported to have said, “Whoever aids an oppressor or taught him an argument to nullify the right of an ordinary Muslims, has drawn upon himself the anger of Allah.”

Let’s make it plain and provide a scenario: A man has been overpowering another man and leading a group of thugs to brutally beat him and his family every day for years. One day, a passerby sees the beating in progress. This witness approaches the group doing the beating and notices that the leader has a broken right hand.

While the group’s leader and his associates continue to kick the victim and move towards his wife and family, the witnessing passerby makes an urgent call — not for the police or his friends to come to the aid of the man being assaulted nor to treat his serious wounds, and not to protect his family, but rather to petition friends for assistance in setting the broken hand, bandaging the arm and arranging for physical therapy for the attacker.

For those who have gotten it into their heads that providing material aid to the leader of an active, white supremacist, terrorist organization is a sort of social experiment that deserves consideration and support, may the following warning and clarification from Imam Ahmad ibn Hanbal be a reminder:

The pale tears of privilege, misguidance, intentional avoidance of Prophetic guidance, and perhaps no small measure of hubris keep many in the darkness of self-deception about how their actions might affect those who have been in the crosshairs of supremacist militia and state-sponsored American terror for centuries. This myopic disregard, “selective hearing” and/or intentional ignorance has much in common with the surprisingly prevalent belief in the inherent pathology of Black people, which allows the real pain and trauma of Black people, including Black Muslims, to be dismissed and/or disregarded as overreactions or distractions from the oppression because “we have allegedly brought it on ourselves.”

It is also usually accompanied by attempts to shame us into believing that liberation is not the foremost concern of the Creator and that the act of calling out strategies that are likely to exacerbate the hate is a distraction from focusing on “improving our condition” — as if they were mutually exclusive.

It is the custom of the oppressor to shift the focus away from their accountability toward the oppressed, and to obstruct the path to liberation for those experiencing true oppression. Our Prophetic example is to center the oppressed in our theological discourses, spiritually liberating activities, social analysis, and strategic engagement.

The Divine imperative of liberation, for the oppressed and oppressors alike, is the surest path to Prophetic resemblance and into the light of our Messenger’s faultless guidance (upon him be peace).

Perhaps instead of contributing to the terror, anxiety, and fear of those most affected when hatred raises its pale head and claims the innocent among us, it might be sufficient to focus on supporting the victims of hatred and on keeping our names out of their supplication: “Beware of the supplication of the oppressed, for there is no barrier between it and Allah.” (Jami’ al-Tirmidhi: Book 27, No. 120)

May all who persist in oppression and the harming of innocents be rewarded for their deeds, may their names be mentioned in every duʻa offered by those whose oppression they had a hand in perpetuating, whose pain they increased, whose fear they magnified, whose deaths they caused, whose chains they tightened and whose blood they ignored.

Unless Allah turns them from their misguidance, may the oppressors be gathered together with the transgressors, terrorists, and tyrants whose lies they affirmed on that day when the recompense for every oppressor will be that which they have earned.

May Allah gather all who oppose oppression of every type together with His Prophet to drink at the blessed Fountain, preserve us from being among those whom the oppressed seek deliverance from in their prayers, and from having our good deeds given to those whose oppression we supported with our thoughts, words, and deeds.

This article was originally published on Sapelo Square, which can be found here. 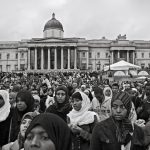