The Wonder of Monotheistic Pilgrimages

Did we always head to the Kaaba for pilgrimage, or was there an alternative?

Did we always head to the Kaaba for pilgrimage, or was there an alternative?

Hajj is a duty unto Allah for mankind, for him or her who can find a way or means to get there. [Qu’ran 3:97] But what did mankind do during the many centuries that the Kaaba, originally rebuilt by Abraham and Ishmael, was polluted by the presence of dozens, and in later times up to three hundred idols? For most of those centuries, monotheists went to al-Masjid al-Aqsa (the Furthest Sanctuary) in Jerusalem “whose precincts We have blessed.” [Qur’an 17:1] Very few Jews and Muslims realize that for more than 1000 years, while Jerusalem’s First and Second Temple, Bait ul Muqaddas/Beit Hamikdash stood, the Jewish festival of Hag Sukkot was celebrated as a Hajj, a monotheistic pilgrimage festival (and in Biblical times, the Hebrew word Hag was pronounced Hajj).

In the centuries after the Jerusalem Temple was destroyed by the Romans, pilgrimage ceased. Today, the overwhelming majority of Jews outside the Land of Israel live in Protestant countries where pilgrimage plays little to no role in religious life. Thus, it is very hard for most Jews to feel the tremendous spiritual uplift that can occur to pilgrims on the long path to, and amidst the mass tumult of, a uniquely holy and sacred place. We can, however, see in the Muslim Hajj, some of the spiritual uplift that occurs when large numbers of people from all over the world travel to one holy place and join together in a traditional religious ceremony. Muslims, in turn, can see some similarities in the ancient Jewish practice of Hajj ceremonies.

The Torah declares, “Celebrate Hag Sukkot for seven days after you have harvested the produce of your threshing floor and your winepress. Be joyful at your festival—you, your sons and daughters, your male and female servants, the Levites, the foreigners, the fatherless and the widows who live in your towns. For seven days, celebrate the festival to the Lord, your God, at the place the Lord will choose. For the Lord, your God, will bless you in all your harvest and in all the work of your hands, and your joy will be complete. Three times a year all your men must appear before the Lord your God at the place He will choose: at the Hajj of Matzah (Passover), the Hajj of Weeks (Shavuot), and the Hajj of Sukkot.” [Deuteronomy 16:13-16]

On each of the first six days of Sukkot, it was traditional to circle the Temple altar whilst reciting psalms. On the seventh day of Sukkot, the custom was to circle the Temple altar seven times. As the Oral Torah says: “It was customary to make one procession around the altar on each day of Sukkot, and seven on the seventh day.” [Mishnah Sukkah 4:5)] Each circle is done in honour of a Prophet; Abraham, Isaac, Jacob, Joseph, Moses, Aaron and David. Muslims will see some similarities and some differences between the Jewish Hajj and the Islamic Hajj.

Read more about the history of the Holy Kaaba here!

With the destruction of the Second Temple by the Romans in 70 CE, the pilgrimage aspect of the week-long harvest festival began a gradual decline in the spiritual consciousness of the Jewish People. Most of the many thousands of Jews from foreign lands outside the Land of Israel and the tens of thousands of Jews from all over the Land of Israel outside the city of Jerusalem who used to come each year to celebrate the week of Sukkot in Jerusalem at Bait ul-Muqaddas, the furthest sanctuary, ceased coming. Two generations later, after a second major Jewish revolt (132-135 CE) in the land of Israel, the Romans rebuilt Jerusalem as a pagan city filled with idols. This stopped all Jews from coming to the ruined site of the Jerusalem Temple, Bait ul Muqaddas/Beit Hamikdash. But even centuries after the destruction of the Temple, and the end of the pilgrimage, generations of Jews repeated wonderful tales about pilgrimage experiences in Jerusalem and at the Holy Temple.

As crowded as Jerusalem was, there always seemed to be enough room to squeeze everyone in. Indeed, every year it seemed a continuing miracle that pregnant woman didn’t suffer a miscarriage, a rain shower never quenched the fire on the alter, the wind never blew smoke from the fire into the crowds of worshipers, and no one was ever bitten by a scorpion or a snake. Most amazing of all, no one complained that it was difficult for them to find lodging in Jerusalem. [Pirkay Avot 5:8]

For Muslims, the Furthest Sanctuary is located in Jerusalem. “Glory to He Who carried His servant by night, from the Holy Sanctuary to the Furthest Sanctuary, the precincts of which We have blessed, so that We might show him some of Our signs. Surely He is the All-Hearing, the All-Seeing.” [Qur’an 17:1] It is significant that the ruins of the Jerusalem Temple was the site of Prophet Muhammad’s ascension, the mi’raj, up to the heavens.

The Kaaba, built by Abraham and Ishmael at the site where Abraham had bound Ishmael as an offering, was some centuries later polluted by the introduction of idols. A few centuries later, Prophet Solomon built a Temple on the site where Abraham bound Isaac as an offering. Some centuries later, the Temple of Prophet Solomon was destroyed by the Babylonians. It was then rebuilt only to again be destroyed some centuries later by the Romans, who would later pollute the whole site with a Roman city with buildings and streets filled with idols. One might say the destruction of the Furthest Sanctuary center of monotheistic pilgrimage in Jerusalem by the pagan Romans, was five and a half centuries afterward overcome by Prophet Muhammad’s miraj, his ascension up to the heavens, and the soon to be realized removal by Muhammad of idols from the paganized Kaaba (Holy Sanctuary) in Makka. 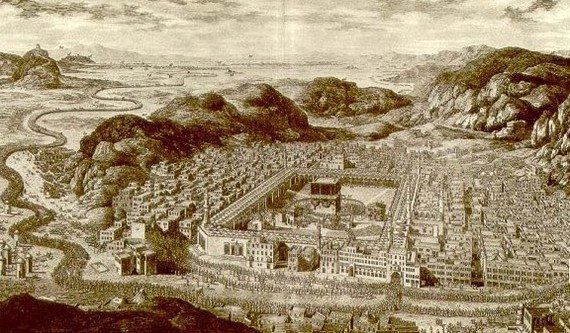 For Jews, the Temple of Prophet Solomon will only be rebuilt by the Messiah. For Christians, Jesus has replaced the need for a special sanctuary for animal offerings. But tens of thousands of Jews and Christians visit Jerusalem every month even without a rebuilt Temple. Prophet Zechariah envisioned a future time when God helps us to establish worldwide peace. All the nations in the world then may travel to Makka and to Jerusalem to worship God.

During Hajj Sukkot, a future Jerusalem will welcome both Jews and non-Jews, even including those who were previously Israel’s enemies: “Then the survivors from all the nations that have attacked Jerusalem, will go up year after year to worship the King, the Lord Almighty, and to celebrate Hajj Sukkot.” [Zechariah 14:16]  Just as the Kaaba has always welcomed all Muslims who answer the call: “Call upon the people for Hajj. They will come to you on their bare feet, or riding any weak camel, and they come to you from every far desert. [Qur’an 22:27]

Only a rare outside observer can experience even a small fraction of the spiritual feelings of those who engage in a pilgrimage tradition. When peaceful pilgrimage to both Sanctuaries occurs, everyone will see what Mark Twain once wrote about: “It is wonderful, the power of a faith that can make multitudes upon multitudes of old, weak, young and frail enter without hesitation or complaint upon such incredible journeys and endure the resultant miseries without repining.”

Rabbi Maller’s new book ‘Judaism and Islam as Synergistic Monotheisms: A Reform Rabbi’s Reflections on the Profound Connectedness of Islam and Judaism’ can now be found on Amazon for $15.