I receive hatred but some good feedback too, so c’est la vie!

I receive hatred but some good feedback too, so c’est la vie!

He has often been critiqued for his work and at times, it has garnered some unsavoury responses from people who believe his art is too controversial. In an interview with the political cartoonist Carlos Latuff, he shares his thoughts on the new President-elect of the United States, his place in the media and his art being a mouthpiece for oppressed minorities across the globe. 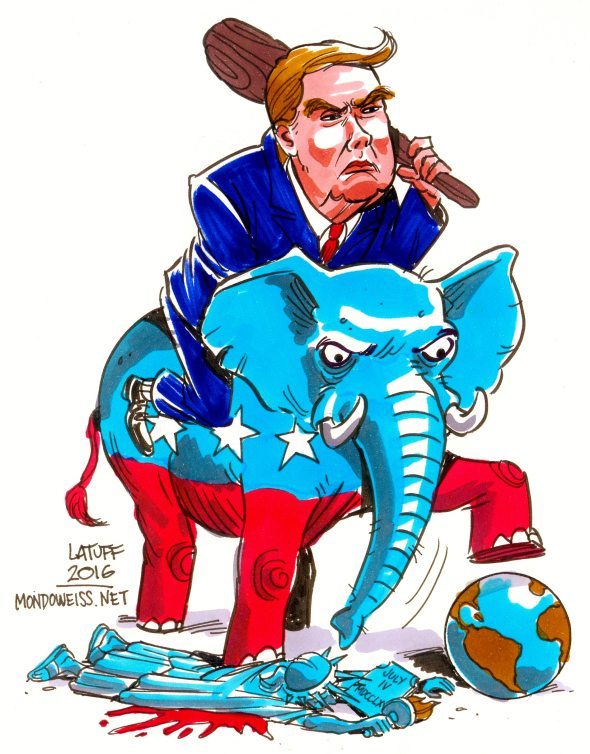 Q. First things first, President Trump. How does that make you feel?

A. I tend to agree with Slavoj Zizek on this one; maybe a Trump victory will be the necessary reality check that the US society needs. Decades of governmental co-optation made the social movement something immobilized by the bureaucracy. A majority of social movements forgot the streets and started to bet their futures in the hands of politicians.

What could be better for a country where Black people used to be hanged in poles and trees than having the first Black president? But in fact, what really changed? Did police stop killing Black people because you had a Black president? With Hillary, all the masks would stay the same whereas with Trump, they’ll fall piece by piece, and to say the least, it will be an ugly face with no make-up.

Q. The media has extensively addressed your work and praised you for being courageous and unapologetic in your stand with oppressed groups all over the world. In your own words, how would you describe the work that you do?

A. I would describe it very basically as art, paired with conscience and opinion.

Q. Many people would say that cartoons are an out-dated way of making a political statement. Why is it that you choose to still do so, and do you think that it is still as effective as it may have been in the day of print media?

A. The power of political cartooning on expressing complex issues in a nutshell remains the same, because no matter if it’s printed or found in online media, images are always effective on addressing a message, whether it’s a good one, or a bad one. Remember the Mohammed cartoons for example? In Turkey you have people arrested for making cartoons. I could be arrested in Egypt for making cartoons about Sisi and the military junta.

“I have myself been arrested three times.”

Q. Early on in your life, what was it that led you down the path of activism; would you attribute it to your parents, or something in your youth, or simply what’s happening in the world?

A. I’m actually not sure, as I have no activists in my family. Since I was a child, I had an interest in foreign affairs; I remember staying up for hours in front of an old short-wave radio listening to Radio Moscow or Radio France International, following news from abroad. It was so fascinating to me, and it may just have been that.

Q. Your work has led to you being banned in countries like Turkey; what are your views on the media censorship that is permeating the world?

A. Rulers usually aren’t fond of political cartooning, especially when artists expose them. In places like Turkey, that claim to be a democracy but where people are being arrested for sharing views on Twitter, free minders aren’t welcome, even there, where political cartooning has a long tradition. If you check the Cartoonists Rights Network International website, you may find other countries where, depending on what you will draw, you can be imprisoned or worse.

I have myself been arrested three times for making cartoons against police brutality and corruption in Brazil. I have been threatened by a TV presenter in Cairo, I’ve had my cartoon blog blocked by Ankara and was labelled by a Zionist NGO in 2013 as one of the “world’s biggest anti-Semites” for a cartoon I made on Netanyahu and Gaza.

“I would like to be remembered as a friend of Palestinians.”

Q. Leading on from that, in October you were contacted by Twitter due to a court order filed against you due to your work highlighting President Erdogan’s hand in the conflict in Iraq. Where do you stand on this issue, and has the case escalated since then?

A. Erdogan is a dangerous character, not only for Turkey but also for the whole of the Middle East. He’s someone with megalomaniac dreams of being the new Sultan of Turkey, seeking support from Israel and Saudi Arabia to become a kind of regional Sunni leader against Iran. All the while, he is silencing dissident voices in his own land, especially that of the Socialists and the Kurds. Erdogan uses a Palestine-friendly rhetoric to fool the Muslim masses, whilst making agreements with the enemy of Palestinians, Israel! Erdogan is living proof of the dangers of having politics and religion mixing together.

Q. Social media has been a breath of fresh air for those who may struggle to express themselves. What are some of the reactions you have received to the work you have produced?

A. I’ve received lots of hatred. It ranges from those who support Israel, to the fan-boys of Syrian “moderate rebels.” However, I have received some real good feedback too, so c’est la vie!

Q. You’re an extremely vocal opponent to the (illegitimate) state of Israel. Where do you see the future of the region?

Q. In the past, Israeli groups and Zionist circles have issued death threats and labelled you as an ‘Iranian propaganda machine.’ Did this in any way worry you, or make you reconsider the work you do?

A. No way! I gave my word to Palestinians when I was in the West Bank in 1997, and in the refugee camps of Jordan and Lebanon in 2009. I will continue supporting them all the way, no matter what may come if it.

Q. The country of Saudi Arabia has once more become the face of human rights, as suggested by the United Nations. What are your thoughts on this?

A. This is my response!

Q. It’s quite interesting to note that your work is almost always published independently and yet still manages to leave a lasting impression and message. Do you ever aspire to see your work featured in mainstream news and media outlets?

A. Sometimes I have cartoons reproduced by the global mainstream media; one instance is the piece I did regarding the Paris attacks. But I don’t think large newspapers would publish my cartoons, especially due to my views.

Q. Publications such as Charlie Hebdo believe ridiculing important figures is ‘satire’ or ‘freedom of expression.” How do you respond to this, and how would you say your artwork differs from theirs?

A. As I’ve stated many times in the past, you can criticize Muslim figures like Erdogan or Salman of Saudi Arabia, you can criticize the way Islam is manipulated for political reasons, but to mock the Prophet Mohammed seems more like a extreme-right provocation, as could be done by Pegida extremists or any Neo-Nazi group in Europe.

Q. What legacy would you like to leave behind? How do you want to be remembered?

A. I would like to be remembered as a friend of Palestinians, that’s all!