If Muslims could stop condemning the Westminster attack, that’d be great!

If you’re a non-Muslim reading this, then please take yourself back to last Wednesday afternoon at around 3pm when you found out about the horror that was unfolding in London. Think back to the emotions you felt; horror, fear, despair, anger. Now think about a Muslim that you know personally (I’m sure you can think of one)… If you do know a Muslim personally, then I don’t think I need to tell you that he/she felt exactly the same emotions as you, and more.

Muslims react to these attacks in exactly the same way that non-Muslims do (shocking I know), but to add to that we also have that nervous feeling in the pit of our stomachs. The inevitability that the perpetrator was ‘radicalised’ in an East London mosque, or watched ‘jihadi’ videos online, OR that they coincidentally pledged their allegiance hours before the attack to ISIS on social media.

What has been telling over the last few days is that amongst the Muslim leadership in the UK there has been a knee-jerk reaction to condemn the incident. Apologetic Muslims condemning terrorism won’t stop Islamophobia. By being the only community to condemn such depraved acts of violence, we are inadvertently being led to accept a degree of responsibility and blame. People don’t hate Muslims because we aren’t vocal enough against terrorism. Muslims have been condemning acts of terrorism for years and that hasn’t convinced or changed the minds of Europe’s far-right or Donald Trump’s alt-right.

In fact, in November 2016 a 19-year-old Muslim student called Heraa Hashmi compiled a list of 5784 instances that Muslims and Muslim organisations condemned an act of terrorism. This 719 page has now been turned into a website (MuslimsCondemn.com) and sadly only proves the point that being vocal in condemnation of attacks won’t stop ignorant people from being ignorant.

The silent majority are aware that Muslims are normal functioning members of society (just like them) and don’t need a statement by the Muslim Council of Britain to remind them of this.

“The attack in Westminster on Wednesday was a cowardly depraved act and it was wrong. There is no justification for this act of violence and we condemn it unequivocally.”  – Harun Khan, Secretary General of the Muslim Council of Britain.

If we all know that the actions of this man were not in line with Islamic teachings and we’re trying to distance ourselves from them, then how about we don’t stick a bunch of Muslim women in hijab on the bridge where this vile and disgusting attack took place? 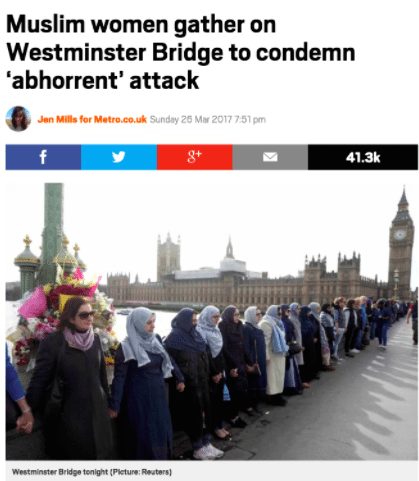 Thousands of pounds have been raised to support the families of the innocent victims of this attack (money that will never be able to bring back the loss of their loved ones but will hopefully assist the families in rebuilding their lives). This is a fantastic gesture and something that Muslims should champion. Muslims shouldn’t only raise money when they perpetrator calls himself a Muslim. They shouldn’t only raise money when it can be used as nice PR stunt. Islam teaches Muslims to contribute and impact social justice in our society at all times.

In 2013 an 82-year-old by the name of Mohammed Saleem was stabbed to death by a racially motivated terrorist who was plotting to cause explosions near mosques in Walsall, Tipton and Wolverhampton. This terrorist (here we can definitively use this term) incident is one that is hardly known in Muslim circles and no money was raised by British Muslims to support the family through this tragedy. Whilst I applaud the efforts of those who raised over £28,000 for the families of the victims of the Westminster incident, let this not simply serve as a tokenistic PR gesture to serve as a means of condemning an attack that we all know had nothing to do with us.

The far-right and the media

The response to the attacks from Londoners has been pretty awesome by all accounts. If we are to assume that this was a terrorist attack, they sought to divide us and create mistrust between different groups of people, but we have not let them have their way. Whilst we the people have managed to move forward, elements of society refuse to let this go. Predominantly, those elements are the far right, the media and Muslims.

Adrian Elms AKA Khalid Masood was not white, converted to Islam and had a beard. That’s fuel enough for their anti-immigration and anti-Islam rhetoric. Despite the fact that he was born in Kent and is reported to have taken Class-A drugs and slept with prostitutes for days at a time, people like our beloved Tommy Robinson have no problem with highlighting the issues they have with Islam as a whole just moments after the incident.

In typical fashion, the media have focussed so much attention on this story that they’ve simply fed into the hands of terrorists (again, if this was a terrorist attack) and have only served to encourage others in carrying out similar attacks to forward their agenda. Simon Jenkins does a much better job of explaining this point than I could.

What was also interesting, was that the media (whilst not taking the overt Fox News-esque approach of blaming Islam and talking about Muslim-only zones in Birmingham) opted to fill their prime-time slots with Muslim experts and leaders condemning the attack and explaining that we’re all shocked and disgusted by the attack. It started to feel like Muslims were guilty by association. Yes, they weren’t saying this was about Islam or that the guy was a practicing Muslim, but Muslim influencers and leaders were being invited onto the sofas at Sky News, the BBC, ITV, Channel 4 and more.

I’ve attempted to stay away from referring to this as a terrorist attack, because details of this crime are still unclear. With the attacker dying from his injuries, the job of the police to piece together the puzzle that led to the fateful events on in Westminster on the 22nd March becomes all the more difficult. One thing to note however is that ISIS’ claiming responsibility is much much to go by in terms of a motive. They have previously claimed responsibility for a fire at the Eiffel Tower, which in reality was caused by a fireworks display and for bringing down a Russian plane in 2015 which investigators ultimately concluded there was no evidence to support. Time will tell with regards to Masood’s exact motive, but it already seems that he had no link to ISIS, though he had ‘jihadi interest’ (which is a term I can’t say I have much understanding of).

As Muslims it’s time that we stopped taking responsibility for the crimes of people who have nothing to do with us or our faith. I think it’s time people started looking beyond simplistic gestures of condemnation because ‘we need to distance ourselves from extremists’.

We need a ‘radical’ change in how we deal with violent extremist incidents. 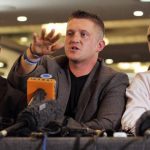 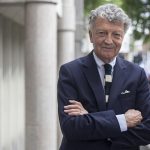