The Balfour Declaration: The 100-year old document that began the plight of the Palestinian people

Today, around 12 million Palestinians live in exile of their homeland. This is a direct result of what was set into motion by the Balfour Declaration.

Today, around 12 million Palestinians live in exile of their homeland. This is a direct result of what was set into motion by the Balfour Declaration.

It was on November 2nd, 1917, one-hundred years ago, that a document was signed by the British, setting off a domino effect that led to an international crisis, systematic oppression, and 12 million Palestinians displaced in 2017.

Arthur James Balfour was the foreign secretary of the United Kingdom at the time, and signed the letter that promised the land of Palestine to the Zionist Federation, which was a political movement whose goal was to establish a Jewish state. The land was not his land to promise, nor did it belong to the British, and the human and political rights of the Palestinians who lived there were completely ignored.

Many of us have seen the famous map showing the loss of Palestinian land from 1947 to 2000. But it is important to understand that it was the Balfour Declaration that set these events in motion. 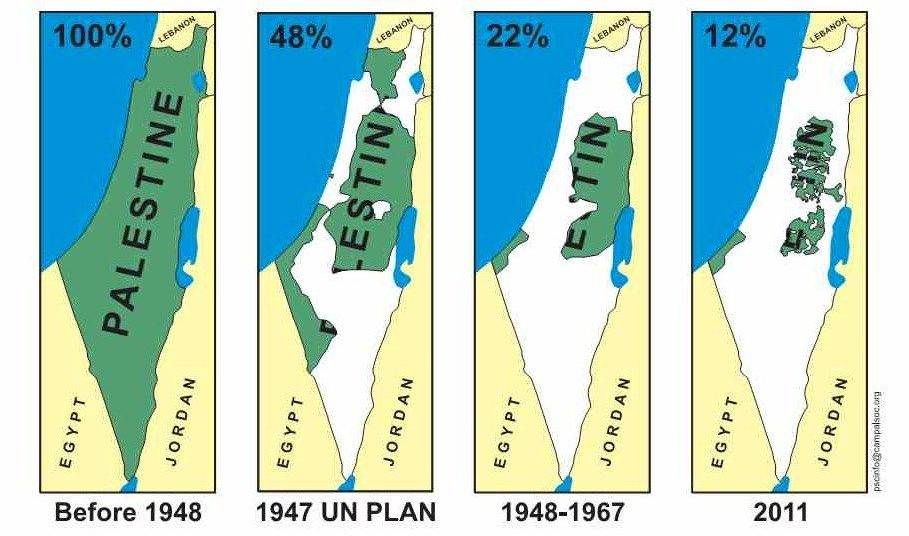 Originally, Palestine and its surrounding countries were one piece of land under the Ottoman Empire. There were nearly half a million people living in this Palestine, of which 75% were Muslim, and almost 100% Arab. It was far from the barren desert that many zionists want you to believe, but rather a thriving epicentre of Arab culture and intellectualism.

In the late 1800s, anti-semitism was at a high in America, Europe and Russia. In this harsh climate, the concept of zionism resurfaced, being the belief in a national Jewish state. This was a concept rejected by the majority of Jews, who contested that they had to fight anti-semitism in their home countries, as opposed to establish a state by usurping land. The zionist movement, led by Theodor Hertzl, claimed rights to ‘Greater Israel’, which included Palestine as well as parts of Jordan, Iraq, Egypt, Syria, Saudi Arabia and all of Lebanon.

Hertzl wrote to leaders of the Western world, promising to “bring cleanliness, order and well-established customs… to this plague-ridden, blighted corner of the orient”, essentially promising to use the land as an extension of power for the Western Imperial powers. Early zionists also promised to build trade links for Europe, as well as the extension of Western military power in the region. Israel Zangwill, a leading Zionist of the time, said:

“Palestine is not so much occupied by the Arabs, as overrun by them.”

Zionists began purchasing land in Palestine in 1882, often evicting Arabs while establishing their settlements. A few decades later, as World War I was coming to an end, the victors were planning how to carve up the Middle East. It was the infamous Sykes-Picot agreement that drew up, among borders of neighbouring countries, the first modern-day borders of Palestine, and Palestine was put under British colonial control, with the Palestinian people now under their rule. It was in this toxic environment that the Balfour Declaration was written, revealing the clear intentions of the British to establish a Jewish state in Palestine.

Settlements began to grow, with an influx of Jewish immigrants creating a vast amount of Palestinian refugees. Zionists began purchasing more and more land dotted across the region. The leader of the movement, Ben Gurion, said,

“We must expel the Arabs and take their places.”

Between 1920 and 1939, the settlement population rose from 10% to 30%, with no sign of slowing down. In 1936, Palestinians held a mass strike, which lasted six months. The British responded by employing zionist armed forces, which began what would become Israeli military presence. These armed forces destroyed the homes of Palestinians in their thousands. This was all led by the British imperial regime, who trained and armed the zionist military forces, which included militias who bombed and murdered Palestinian innocents, and eventually turned to British forces themselves. Menachem Begin, who was a commander in this terrorist group, eventually became Prime Minister of Israel.

In 1947, the British turned over control of Palestine to the UN, who carved up Palestine, fulfilling the wishes of the zionist lobby in granting them a Jewish state. The native Palestinian community was completely excluded from the discussion, and the UN essentially handed over 55% of Palestinian land to the zionists. 40% of the population was still Palestinian Arab, which did not sit well with zionist leaders such as Ben Gurion. What followed was terror, massacre, and war. Nearly 800,000 Palestinians fled their homes, and 80% of Palestinians fled the Israeli-controlled areas of Palestine. Nearly 500 villages were ethnically cleansed and raised to the ground, with Jewish villages built in the place of Arab villages. Moshe Dayan, a military commander in the war, said,

Today, around 12 million Palestinians live in exile of their homeland. This is a direct result of what was set into motion by the Balfour Declaration. To put it bluntly, it was the British promise and aid to fulfil the zionist dream that has led to the horrors of apartheid that we see today in Palestine.

The Balfour Declaration is not something that should be celebrated, and to this day the Palestinian people are yet to receive even an apology for it by the British government, in fact, Palestine isn’t even recognised as a state. An apology would not make up for a century of Palestinian oppression, but the acceptance of responsibility will set in motion the rectifying of the declaration’s damage, and the return of Palestinian land to its people. As Palestinian president Mahmoud Abbas writes:

It is essential to understand the history of the systematic oppression of the Palestinian people, and which powers helped facilitate this, to understand the turmoil that the Middle East finds itself in today. We pray for peace for the Palestinian people, and for a free Palestine. Now more than ever, the Muslim Ummah needs to unite and see past their theological and political differences in order to provide our Palestinian brethren the support they need in the face of relentless oppression.