Mo Salah’s GQ photo-shoot: What do you think?

Showing off abs and smiling with a supermodel is relatively low-key in the world of football player antics. So why is he now receiving so much hate?

Showing off abs and smiling with a supermodel is relatively low-key in the world of football player antics. So why is he now receiving so much hate?

Mo Salah is arguably one of the most popular football players in the world right now…but does this make him one of the most popular Muslims as well? The fact that Salah is (openly) Muslim brings out both the good and bad from the Muslim community – while many see his phenomenal football skills as just a means to the greater good of normalizing Islam for the millions of football fans around the world, many argue instead that it doesn’t in fact matter what religion he follows, he is simply a football player period.

Salah’s most recent photoshoot with GQ therefore, has unsurprisingly brought on a hoard of passionate emotions. With his shirt wide open and grinning under the embrace of Victoria Secret model Alessandra Ambrosio, many have been appalled at his apparent lack of Islamic morals – and yet, he is a football player first, right?

For those who see Salah as an ambassador for the religion of Islam, this most recent photoshoot has been shocking. And it cannot be denied that Salah has indeed done a lot for everyday Muslims – football fans who otherwise would never had interacted with Muslims or Islam are singing his name in praise and wearing his jersey…this by default must mean that he now has an obligation to represent Islam to the wider world, right?

As Muslims, it can be daunting to feel the pressure of the world watching our actions – every mistake or mishap you do in public might only perpetuate the negative stereotype following Muslims everywhere. And as a public figure, although his profession is solely as a football player, Salah has had to balance being both a role model for football fans and for Muslims around the world. By posing in what many argue is an un-Islamic dress-code and stance with the opposite gender, Salah has been criticized for letting down the millions of those who look up to him as a popular Muslim figure.

But did he ever claim to be a Muslim figure? His career has not been based off of the fact he is Muslim, it has been based off of his skills as one of the greatest football players in the world – his religion happens to be who he is off the field, not on it.

…but he is, after all, a footballer

For those who see him simply as a football player who happens to be Muslim, the GQ photoshoot has been nothing new. Showing off abs and smiling with a supermodel is relatively low-key in the world of football player antics. So why is he now receiving so much hate? Muslim public figures are only popular until they mess up in the eyes of the wider community – mistakes and differing opinions are not as nice-looking as a picture-perfect Muslim.

But did he in fact, mess up? As a football player he most certainly did not, he simply posed on a magazine cover, a celebratory stance in the world of football. Yes he is Muslim, but has he ever used his Muslim-ness to further his career? Did him being Muslim ever stand as the sole reason why millions around the world sing his name during matches? 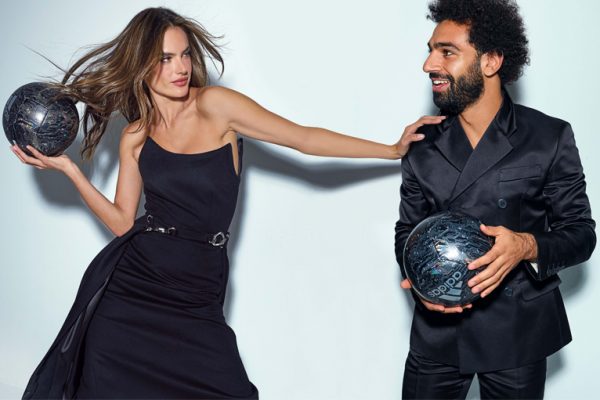 He arguably acts as footballer and a footballer only, never has he openly used his religion in his career on the field. While his gratitude and skills in football may be attributed to his faith, Salah has never claimed to be a Muslim influencer. He has, however, claimed to be a footballer. And this is what many have pointed towards when looking at his GQ photoshoot – he’s done nothing wrong as a football player, so why bring up his religion now?

Do we have a double standard when it comes to men?

Similar debates have been opened in the past with Muslim women who have stepped outside of what the Muslim community deems acceptable: Noor Tagouri in her Playboy photoshoot and supermodel Halima Aden in Sports Illustrated. Both were heavily criticized for modeling in Playboy and Sports Illustrated…so is the case of Salah modeling in GQ any different?

While we may in fact have a double standard when it comes to Muslim men, we might look at two main differences to help understand this particular situation: GQ has not historically objectified and harmfully sexualized women, while the other two magazines arguably have, and Salah has never used his religion as part of career, something Tagouri and Aden have done.

These two arguments may in fact, mean nothing to those who see a double standard, but they do serve as two important differences between the cases. While opinions may change and thoughts around Salah’s photoshoot will fluctuate with emotions, the one thing that remains constant is Salah’s extraordinary football skills.

So instead of focusing on whether Salah is being a good role model or not, let us instead focus on two things: one, Salah continues to be one of the greatest players in the world, and two, perhaps this discussion has brought on a new realization: we might, in fact, rely too heavily on the idea of Muslim influencers and role models. Why do we so desperately need Salah to be an inspiring Muslim role model? Can we not just focus on him being a great football player and instead focus on the real Muslim role models: the Holy Prophet, Khadija, the family members of the Holy Prophet, and some of his closest companions? Are they not good enough for us?

Top 11 Muslim Footballers at the Africa Cup of Nations