The recent carbon dating of an ancient Qur’anic manuscript at the University of Birmingham has now added even more proof regarding the unparalleled degree of certainty with which the Quran has been preserved.

One of the oldest texts of the Qur’an in the world, on parchment that was possibly made within the lifetime of the Prophet Muhammad, has been found in the collection of the Cadbury Research Library at the University of Birmingham.

These folios have been Carbon 14 dated to within the same time frame, or perhaps shortly after, our Prophet. In other words, if this parchment wasn’t written for/by a Companion, then it was written by/for a student of one of the Companions. 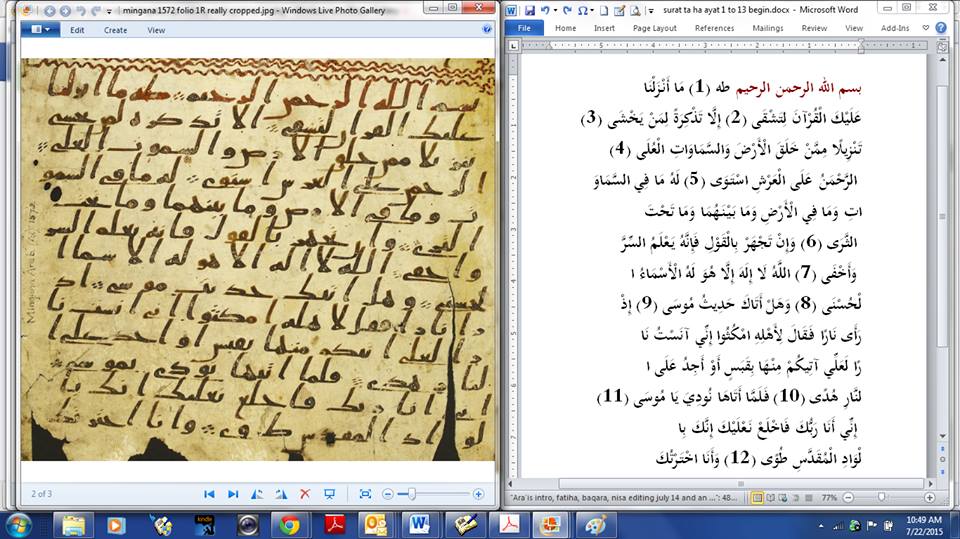 In this image, prepared by Prof Godlas, you can see the original manuscript, written in the ancient Hijazi manuscript, and compare it with its modern, typed equivalent.

This collection, called the ‘Mingana collection’ (after the researcher Alphonse Mingana, d. 1937) was purchased by Mingana in either Iraq or Syria, almost a hundred years ago. Edward Cadbury, the founder of the famous chocolate company, sponsored Mingana’s trips to the Middle East. His collection, which includes hundreds of manuscripts, is primarily housed at the University of Birmingham, in the UK.

Many Muslims ask me, ‘How come so many Islamic documents and manuscripts ended up in non-Muslim lands and libraries?’ The response, in a nutshell is: colonialism, and the power of money. Some manuscripts were simply ‘acquired’; but most were sold by private owners, or on the black market, to travelers from Europe who could pay what would have been considered astronomical prices for the time.

And frankly, that is a good thing. The Muslim world simply did not have (nor does it have!) the latest technology or the scientific means to take care of these manuscripts the way that the Western world is now doing. It is my belief that Divine Will is allowing these manuscripts to be preserved in the best manner possible, even if that is occurring at the hands of those who do not believe in them in the first place.

Truly, we have sent down this Remembrance, and We shall, for sure, preserve it

[Photo and Arabic type up courtesy of Prof Alan Godlas]