Muslim and the City: The Cosmopolitan Muslim

Walking into my favorite coffee shop in DC, the one a few blocks away from Dupont Circle Metro Station, I order the coffee of the day as per usual and take a seat. I unzip my bag and pull out my laptop and notes. Thus, the dilemma begins. How can I work in silence? What do I listen to; Qur’an or the 50 Cent Pandora station? There seems to be a deep dilemma going on within me: should I feel guilty for not listening to Qur’an or a lecture every time I plug my headphones into my laptop? But, oddly enough I know that I am not alone when it comes to feeling this way.

About a year ago, I was talking to a friend who described me as a “Cosmopolitan Muslim”. She told me if I had my own show it should be called “Muslim and The City”. A witty, yet halal version of “Sex and the City”. Usually when we see the word ‘cosmopolitan’ we think of someone always in tune with the latest fashion trends. This person is always at the right place at the right time, on purpose. So, a cosmopolitan Muslim should have a neatly trimmed sunnah beard or a brightly colored hijab that goes against traditional hues of black. This is not to be mistaken for simply being Westernized, I mean, even ISIS members drive around in Ford trucks, wearing Nike. As my favorite academic Sherman Abdallah Jackson said, “there are no non-Western people, just varying degrees of Western-ness.

We try and fit our Muslim persona into a nice, neat, non-offensive package which can be acceptable for the West.

This word cosmopolitan is tricky though. When my friend said it, I pondered over what she meant by it. I whipped out my smart phone that night and googled it. The common definition is basically, ‘one who is comfortable in many settings.’ I thought about myself and how I am perfectly comfortable in a coffeehouse in DC discussing the latest political news. Or sitting on the lawn at my aunts house in Smithfield, Ohio (population 869) discussing fishing while roasting marshmallows (try finding halal marshmallows in Smithfield!) under the star glittered night sky. I know not all Muslims have the ability to be fully adaptable or comfortable in their environment, especially in places where Islam seems to be stigmatized.

Paris banned street prayers and Moscow banned Eid sacrificing. Even in the great city of Phoenix, Arizona neo-Nazi white supremacists held an armed protest outside of a masjid. Yet, any form of pornography is available for anyone to download at any time of day. Seem backwards? But, I digress- because I live in Washington, DC where the phenomenon of street prayer never reached our ears and the slaughter of goats for Eid can’t be done just a few miles outside of the city.

We try and fit our Muslim persona into a nice, neat, non-offensive package which can be acceptable for the West. But there will always be a problem. For me, this problem occurs when I am invited to a happy hour with my co-workers and have to decline a drink. Usually the follow up question is, “oh, for religious reasons?” Admittedly, the cosmopolitan label has limitations. My favorite is when a halal conversation casually turns haram and I attempt to play it cool despite how deeply disturbed I am by way men objectify the bodies of women in a degrading manner.

Our youth are conflicted like many prior generations who had to juggle the dunya and the deen.

It doesn’t help that many of our scholars are out of touch with the youth when it comes to many pressing issues relevant to today’s society. Take the famous video of Mufti Menk where he is discussing music. What struck me as odd was how he used Madonna as an example while discussing ‘popular’ music, showing that he is a bit unaware of certain aspects of youth culture. (You can watch the video here)

Our youth are conflicted like many prior generations who had to juggle the dunya and the deen. Some say juggling isn’t an option, and you must drop the dunya and keep the deen. When I hear this I can’t help but, cringe because it just isn’t that easy. The fact is, we live in a society where we are nonstop bombarded with un-Islamic images. And not only that, we have to sift through these images and pick the ones that we are comfortable with while being compatible with Islam. Is that boyfriend or girlfriend you have compatible with Islam? You know that boyfriend or girlfriend you have to hide from your parents because the person is of a different sect of Islam, religion or wait for it…race? How many marriages never got the chance to start due to ignorance, once again I digress. 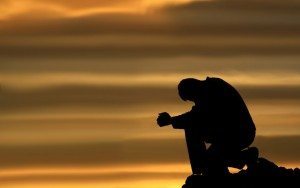 Let us focus on just one thing, ourselves. Society has duped us into believing that alone time is inherently anti-social. We look for distractions that detach us from own minds so that we are never truly alone. We even take our phones to the bathroom- I know I can’t be the only one! Go for a nature walk, start a journal, read a book. Become comfortable with yourself. As my mentor told me:

“Nobody knows your problems better than you. You sleep with them, eat with them, and wake up with them. Just take the time to acknowledge them”.

Praying For One Another: The Highest Form Of Love

The Unknown Future and Our Ultimate Dependency on Allah