I remember being apprehensive to apply for other jobs because a part of me lost trust in white people in positions of hiring power. And I started to really examine the psychological impacts of subtle racism and what the glass ceiling was. It was a ceiling splattered with the disappointment and stress of millions of people who aren’t “seen”.

When I first started working, I’ll be honest; I had probably never understood middle-class racism or unconscious bias. Fast forward post-university life when I began applying to roles in various organisations across the private and policy sector, some prestigious, some less so. I did so with that same zeal and enthuse that I’m sure millions around the world do when getting ready to start their career. Of course, millions of people aren’t brown, hijab-clad Muslim women.

I landed a temporary role in London with the prospect of it becoming permanent. It was a competitive process. It was going to be great. I had so many ideas.

I remember one of the first catch-ups I had in my new job was with a black member of staff. One of the first things she asked me was how did I find working in this area as a visibly Muslim woman who wore hijab? She said, “I understand it must be very difficult?” Naively, I was quite surprised by what she was asking and I said, “Yes, I have noticed there aren’t that many people who look like me in this type of work but no, I don’t think it’s a problem…right?”

She would talk to me about unconscious biases and the difficulty of navigating ‘white spaces’ – to which I would listen to and hope I could remain unscathed from the things she was describing. After all, I had landed this job fairly easily, had a traditional educational background and work experience that my employers seemed pleased with. They seemed really keen to have me so I thought I could add value.

This all came crumbling down within the four months I was there. Hopes to turn my position permanent amounted to empty promises. I started getting confused messaging about what the seniors thought about my passion. Other seniors, who had never worked with me, were at the pub saying how they didn’t know how well I fit in because I’m ‘quiet’. I started to slowly piece together the conversation I had with my black colleague at the start – is this what she meant?

The comment in the pub was actually relayed to me by another black colleague (as I wasn’t at the pub with them) who thought that this was important for me to be aware of. The only other three ethnic minority women who worked there had my back and were my greatest source of support in the workplace. None of them are still working there now, and one of them also left due to similar reasons.

I was naturally disappointed with how things had unravelled but the most disappointing aspect of it was the shirking of responsibility by the seniors once the company made the decision to let me go. None of the seniors in the team that I directly worked with came to speak to me. The HR director told everyone in the office that when I bumped into her in the corridor I gave her a dirty look because I was bitter about not being kept on. I couldn’t even remember bumping into her (as I think I was on the phone) but my black colleague who told me this, said to be aware as everyone knew it wasn’t true but no one challenged her on this.

So I called a meeting with one of the seniors in my team. We went out for a coffee and I expressed my concerns about how I had been treated. She looked at me blankly and said a lot of things, sorry wasn’t one of them. It’s so hard for them to say sorry. The lack of accountability is so unprincipled and I think as a young non-white person entering the working world, trust is probably one of the first things to disappear. I know these things happen to white people too and I have had conversations with white friends and peers who could relate to this. But there are other layers of biases, which can make Muslim women in particular, more susceptible to bearing the brunt of a lack of diversity.

In my subsequent jobs, my confidence was stung from previous experiences and I was a bit more timid starting this next role…

It started off with the company initially turning me down for the role I applied for but then saying that they could offer me an internship, with the hopes that in three months’ time I could transition into the role I originally applied for. At my three months review, I received glowing reviews. But I was still kept on as an intern.

At six months I was told I could transition into a full-time role. I completed the assessment and got ready for the interview. (The assessment and interview had also only applied to me and not others, as there had been a ‘sudden change’ in policy. I know this because I asked other colleagues about this). Two days before the interview, they scrapped the position as they said funding was cut… despite them being a company worth millions and others within the team getting promoted. Of course, I was extremely annoyed and frustrated but took it on the chin. These things happen.

However, one of the directors, who took a particular interest in me, took it upon him to have a chat with me to apologise for having led me on and cancelling on me two days before the interview. At this point, I was still giving them the benefit of the doubt in that these decisions happen in companies for many reasons and I had made peace with it.

Yet in the chat, he went on to tell me the news I’d never heard before from my line manager. News such as, at my three-month review, the team felt like I wasn’t ready but they liked me so wanted to give me a chance. (First I had heard of it). But they weren’t sure if I was the right fit. (I kept hearing this ‘fit’ thing but no one would fully explain what it meant). They thought I was too quiet and never professed I wanted the job, despite having clearly stated this every time I was asked.

Furthermore, he went on to tell me how at one specific meeting, I was looking at my phone and they took this to mean I was disinterested in being there. (I was gobsmacked; I couldn’t believe I was being watched in this way but also, what?). But the cherry on the top was when he gave me his honest advice, which was, I need to adopt the hunger and passion of a white middle-class man in order to go far in life. He went on to pick out white guys I worked with as model examples. He said that we live in a meritocracy and he isn’t interested in diversity, he’s interested in talent.

I didn’t really know how to unpack all of this and just remember sitting there a little bit stunned. Looking back, perhaps he was trying to prepare me for the minefield that is institutionalised racism and bias but I found it mind-numbing to hear it packaged, as much needed career advice. When I responded to this by saying work cultures need to change to make sure everyone can be successful, how do you expect me to change? He replied back with, you just have to be seen.

I still to this day do not know what it means to be seen. Do I need to shred my hijab? Laugh like a hyena at any inappropriate/bigoted joke that is casually shared around the office floor? Walk around dishing out false smiles and compliments to every person I pass? Only post pictures on social media with an alcoholic beverage in my hand and a semi drunk-cheesy smile loving life? Claim to be spiritual only but not religious? Have a drunken story to share? Dress sexy? I still don’t know to this day what it means to be seen.

But my confidence came crashing down all over again. I remember being apprehensive to apply for other jobs because a part of me lost trust in white people in positions of hiring power. And I started to really examine the psychological impacts of subtle racism and what the glass ceiling was. It was a ceiling splattered with the disappointment and stress of millions of people who aren’t “seen”.

Before I left, I told HR about my experiences working there. One of the HR ladies sympathised a great deal and her exact words were, “I should have known when you started this might happen.” I later received a phone call from another director, sharing her concerns, but not once apologising. It was a painful phone call and a lot of advising me to put this behind me and move on – for my own sake. She said that would I accept the ‘career advice’ given to me had been misunderstood and acknowledge that the director in question was definitely not a racist. You get the gist of how such a phone call would have gone down. It was textbook copping out.

The first HR lady I spoke to was a gem however in that she believed what I had to say and offered me support. It’s not all bad out there. Speaking and sharing our experiences is important. As children of immigrants, as Muslims, as ethnic minorities, we know we are hard working. We understand work ethic. We know that we’ve got the ability to learn and earn in a language that isn’t our mother tongue. Which is exactly the kind of thing that must internally drive some portions of society mad when they can’t fathom the willpower of a brown hijab-wearing woman speaking and studying, courageously than they ever could in a second language. 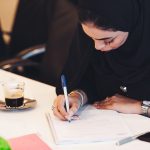