Brazil is, by far, the largest exporter of Halal meat in the world. You probably didn’t expect that; it certainly surprised me when I first read it. In fact, Brazil exports more than twice as much as the world’s second-largest producer, Australia (equally surprisingly). 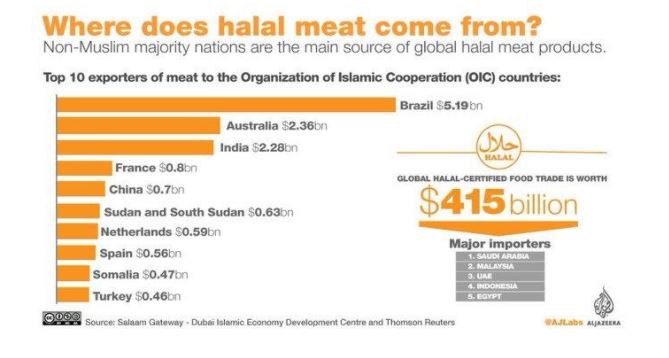 The history and structure of the industry

Only a Muslim can slaughter an animal for its meat to be considered Halal. This means that there is substantial demand for Muslim labour in the Brazilian halal industry. Whereas this job creation should benefit Brazilian Muslims, a combination of factors make reality much bleaker.

Firstly, from a socio-economic perspective, Brazil’s Muslim population is relatively wealthy – the average Brazilian Muslim has a higher income than the average Brazilian. This was not always the case, of course. The first ‘large’ wave of Muslim immigration, primarily coming from Syria and Lebanon, occurred in the mid-20th century. Most of these immigrants were initially street peddlers, but this changed in the 1970s when Brazil realised the export potential of the Arab world, which had just discovered oil. Because of their connections in the Middle East and their cultural knowledge, Brazilian Arabs slowly went from “pariahs into partners” [1,2].

Secondly, being employed in a slaughterhouse is usually undesirable. Workers must endure relatively low pay, frequent internal migration, temporary contracts, physically intensive labour, repetitive tasks, and a cold environment. There is also the small matter of having to slaughter animals all day. Brazil’s wealthy Muslim population felt that this work did not reflect their socioeconomic background. Further, there were fewer than 40,000 Muslims in the country in 2010, so labour supply for halal slaughterhouses is extremely limited within the country.

In summary, Muslims in Brazil were largely unwilling to satisfy the demand for their labour in Brazilian slaughterhouses. The demand for labour, however, would not simply dissipate – the vacancies were almost entirely filled by migrant workers.

Initially, the Brazilian Halal industry would recruit Muslim workers at local mosques and collaborate with local NGOs to employ them. However, according to a local NGO, Muslims migrants increasingly “showed up in Brazil on their own, with the intention of working in the halal industry” [3]. Other than the few that could enter Brazil with the help of their contacts, the migrants made the journey to Brazil through traffickers. When traffickers realised that Brazil had an unfulfilled demand for Muslim workers, they sought to profiteer from the situation. The director of a prominent NGO describes an example of this situation:

“In Bangladesh, it was announced that there would be work, accommodation, residence, documents in Brazil. They [Bangladeshi immigrants] told us, that this had been published in the newspapers, […] that you would get documents and a stable job, and so on. But I don’t have any idea who was behind this. Agencies… they always spoke of agencies… which agencies? I don’t know. And the persons who brought them here […] cheated them [the immigrants] to bring them here, to exploit them on their extremely long detours with terrible transport conditions… There is one person [a Bangladeshi immigrant] who, even today, is extremely troubled when he recalls what he went through to come here, on these misleading routes which they [the traffickers] created for him. For him, and for his colleagues, many colleagues…” [4]

The total number of migrant workers that had entered through these trafficking routes was in the thousands, according to estimates from the Brazilian Ministry of Labour in 2017; the issue was creating negative publicity on the international market [5]. Brazil’s halal meat industry sought to rectify this. Following intense lobbying by the industry, the law was adjusted: it was now possible for foreign workers to demonstrate their professional experience without providing an educational or employment history [6]. Effectively, this meant that you could get a Brazilian work permit if you could prove that you were Muslim. If you were Muslim, you were qualified to enter Brazil. Although it didn’t end trafficking, it was a clever way of reducing the impact of the trafficking problem and quelling the critical voices in the media.

In some ways, the legal change was welcomed by Muslim migrants, who mostly arrived in Brazil from war-torn, poverty-stricken countries. Europe was facing a refugee crisis, inducing a rise in xenophobia and Islamophobia – it was, and still is, politically unpopular to welcome economic migrants from Muslim-majority countries. As a result, they were increasingly being turned away by European countries; in contrast, Brazil receives both them and their Muslim identity “with open arms”, according to some of the migrants interviewed by a local NGO [7].

Unfortunately, beneath the welcoming image of Brazil’s halal industry is a difficult and exploitative reality for Muslim migrant workers.

Typically, these are men that have families to support back in their native countries. Much of their income is, thus, transferred out of the country as remittances, but Brazil has a shockingly low minimum wage (less than £2500 per annum) [8] – workers are barely paid enough to sustain their own livelihood. Worse, they are often paid below the minimum wage because the language barrier leaves them exposed to exploitation.

In essence, most endure awful conditions in order to support their families with minimal income. The situation has been compounded by a substantial weakening of the Brazilian currency, the Real, which has recently reduced the value of the money workers send back to their families. Despite all of these setbacks, many are glad that they are in employment.

The most serious issues occur if, God forbid, a Muslim migrant worker loses his job. Brazil’s worker protection rights are among the worst in the world and are being further eroded under President Bolsonaro’s government [9]. Firstly, employment contracts are given on a temporary basis. If demand for Brazilian halal meat falls, as it did during the Salmonella scandal in 2017, the industry can lay off workers immediately without providing them with any support.

These workers are left unemployed and the language barrier hinders them once more – being unskilled and unable to speak Portuguese, it is virtually impossible to secure work once unemployed. As a result, some are made homeless, because of an inability to pay rent; others may be drawn into gang crime in Brazil’s inner cities; still worse, many lose their Brazilian right of residence, which is dependent on their employment.

As you can see, the situation of these Muslim migrants is dire. Searching for a reliable way to support their families, they are exploited by traffickers on their journey and then the industry at their destination. For the lucky ones, it stops there – out of desperation, they usually leave Brazil within a couple of years. For the others, crime, homelessness and deportation are additionally on the cards.

How should a Western Muslim proceed?

Within this complex issue, there are certain aspects that are easier to solve than others. We cannot annihilate trafficking routes from Bangladesh, but we CAN put pressure on local newspapers to stop traffickers advertising so misleadingly and push the aforementioned ‘agencies’ for transparency.

Around a quarter of Brazilian beef exports and half of its poultry exports are supposedly halal [10]. Both products make up a significant part of Brazil’s total exports, and Brazil’s growth is largely export-led. The takeaway from me writing ‘export’ four times in two lines is this: the consumer power of Muslims is particularly strong here.

So, we have the power to act and we should act – but how?

It is impossibly difficult to raise the National Minimum Wage or to further worker protection rights across the board, but it is easier to ensure that migrant workers are at least paid the minimum wage. Whilst an outright boycott seems like an appealing way to do this and would significantly damage the industry, it is important to note two things.

Firstly, a reduction in demand creates unemployment for Brazil’s Muslim migrant workers (and the other resulting problems discussed earlier). Secondly, unstructured boycotts will be ineffective in getting the message across; for example, it may be interpreted as a signal that Brazil’s halal meat prices are too high. The solution must, therefore, be more nuanced and structured than that.

Luckily, we have a historical blueprint for action in this area. The majority of Brazil’s trade in halal meat is done through the Organisation for Islamic Cooperation (OIC). It was unsurprising that, in 2010, when the OIC applied pressure on the industry to build prayer spaces and provide prayer breaks, this outcome was swiftly achieved. Therefore, Muslim consumers can go through the OIC again.

Unfortunately, the OIC is itself difficult to influence. Pushing it to act involves going through halal certification agencies – if meat produced by companies that exploit workers is deemed non-halal, the OIC can no longer sell it, so it will no longer buy it from Brazilian producers. Here, Brazilian producers would be forced to change their working practices directly – migrant workers are no longer exploited, nor do they lose their jobs.

The good news is that, if we push for it, this outcome is close. A small number of halal certification agencies are taking note of working conditions and condemning exploitative producers. Whilst they are condemning it, their certification requirements are unchanged. This is the specific change that every Muslim should be pushing for – the rest will largely fall into place as I have outlined above.

2.  More information on this transition is available here: https://www.researchgate.net/publication/330756648_Assembling_halal_meat_and_poultry_production_in_Brazil_Agents_practices_power_and_sites

3. Same source as above

4. Same source as above

9.  https://www.ituc-csi.org/IMG/pdf/2019-06-ituc-global-rights-index-2019-report-en-2.pdf the International Trade Union Confederation ranked Brazil among the ten worst countries in the world for working protection rights

10. Scandal in Brazil’s “halal meat” exports across the Muslim world

11. The Amazon rainforest is burning, and Muslims must step up to help save our earth 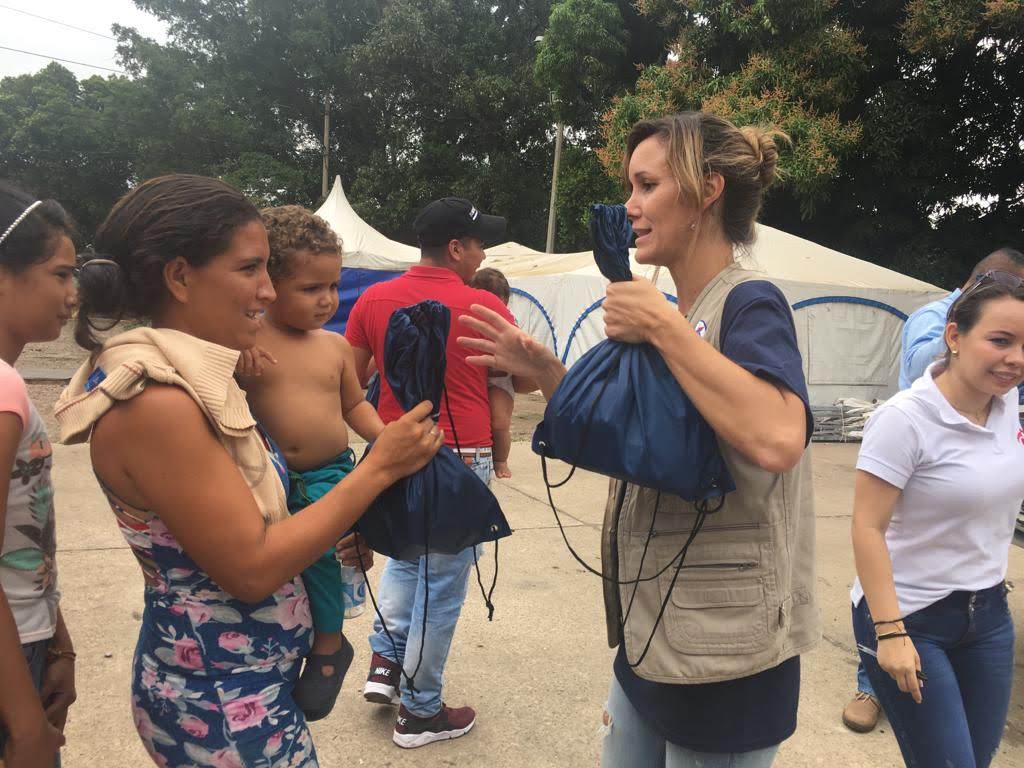 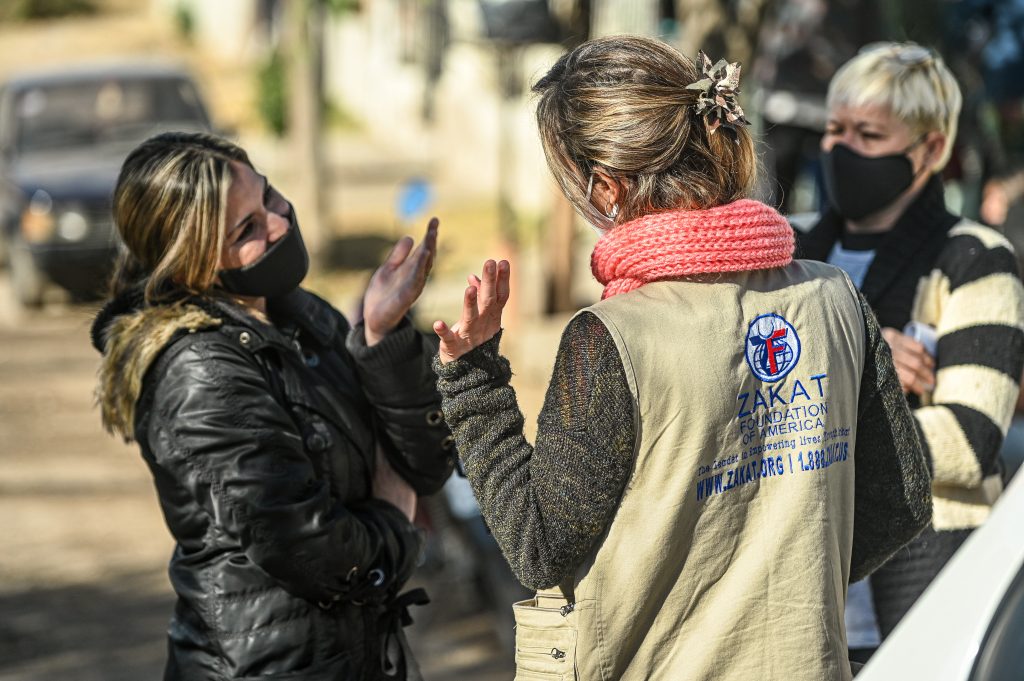 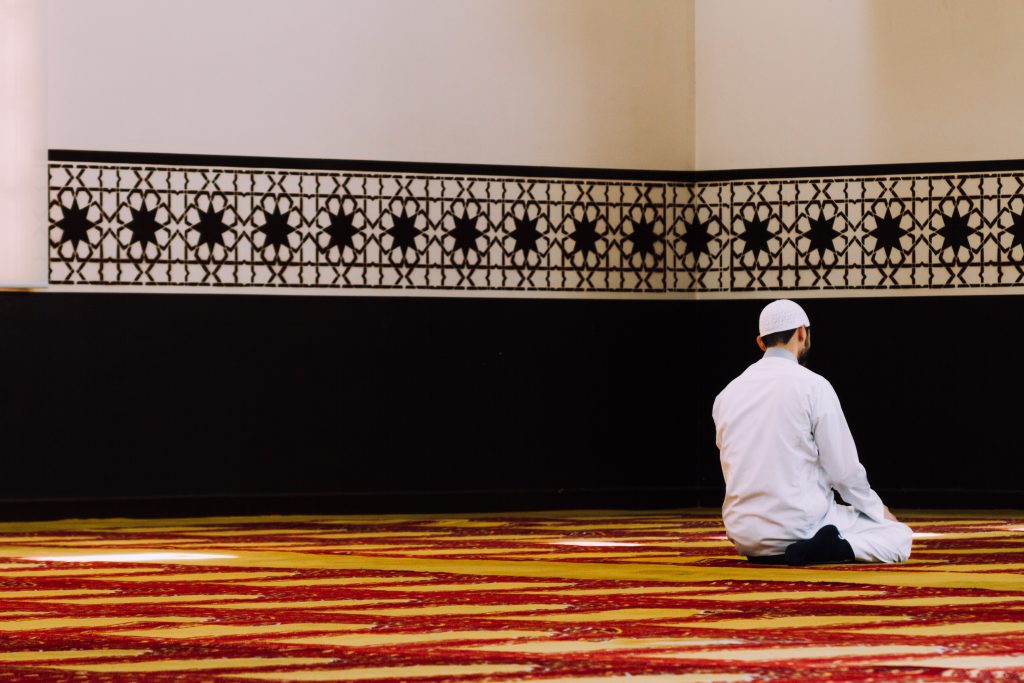