“We have a duty as Muslims to aid other Muslims, and we have a duty to help the oppressed, especially the indigenous who are oppressed in their own ancestral homelands.”

“We have a duty as Muslims to aid other Muslims, and we have a duty to help the oppressed, especially the indigenous who are oppressed in their own ancestral homelands.”

Joni, a Native American mother and grandmother who lives on the Fort Peck Indian Reservation in Montana, is at risk of becoming homeless after losing her apartment. Her son and daughter-in-law do not have the financial capability to fully support her, and have turned to Launchgood to help raise funds to build a new home for Jodi to live in comfortably.

Converting to Islam a year ago, Joni is a Chippewa-Cree Native woman, and the only Muslim who lives on the reservation. Life on the reservation can be difficult, as described by her daughter-in-law, Nourah AbuShaban. With both a severe housing shortage as well as brutally cold winters, it is essential that Joni has a comfortable and heated home to live in:

Most people don’t know what it’s like to live on an Indian reservation. Most people don’t think about Native Americans because they don’t come across them in their personal lives, but, Fort Peck Indian Reservation, where Joni raised my husband and brother-in-law, is very real. So are the disproportionate rates of suicide, addiction, health disparities, homelessness, and violence. There is a housing shortage across the reservation, power outages in the wintertime, and it’s not uncommon for people to freeze to death…[but] Joni is a survivor.”

The funds gathered for Joni will go towards building her a new home on the reservation, as her son and daughter-in-law cannot fully provide all the finances themselves. According to Nourah, while Joni is still a new Muslim, her devotion remains strong despite the hardships in life and on the reservation: “She loves Allah, reading Quran, and learning about the deen (religion) from me and my husband”. 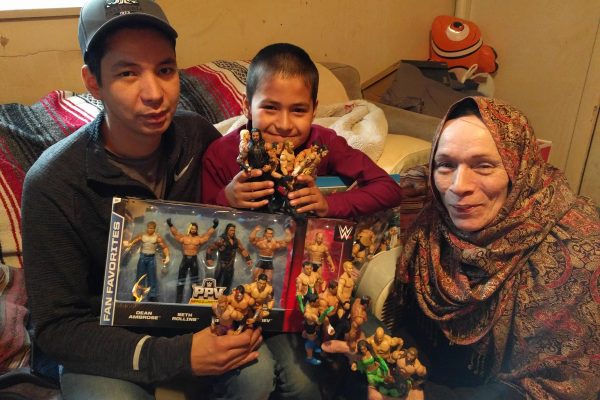 Joni represents three often marginalized groups of people in the United States: women, Native Americans, and Muslims. It therefore remains imperative on our parts to help in whatever way we can – to not only help out one individual and family, but to help raise awareness and offer support to an often over-looked and ignored minority in our society.

Nourah goes on to describe life on the reservation for Native Americans in general:

It is impossible to discuss Joni’s story or make reference to Native Americans without addressing the root of the problem. Ever since settlers first landed on this continent, the Federal government has waged war against indigenous lives and cultures and has carefully maintained an ongoing genocide against the Native Americans…hundreds of years of massacres, forced removal, poverty, waves of foreign plagues, the atrocities of the boarding school system, the erasure of Native languages and identity… And now, perhaps most ironically (an irony surely not lost on the reader), an indigenous woman, a diaspora in her own country, is about to lose her housing.”

Hoping to raise around $18,000 in total, the family as so far raised almost $12,000 – and inshallah with continued support and prayers, the family can raise the funds needed to help Joni live in a settled home. With the donors coming from around the world, it looks as though this small campaign may have touched the hearts of both Muslims and indigenous peoples around the world.

“As the only Muslim on the reservation, Joni also represents Islam and makes da’wah in her community by setting an example, by living according to the sunnah,” Nourah stated. “We have a duty as Muslims to aid other Muslims, and we have a duty to help the oppressed, especially the indigenous who are oppressed in their own ancestral homelands.”

To donate or learn more about the campaign, click here.