With the world’s recent obsession with PokemonGo, now is high time to really take into consideration the effects of gaming. One game that has recently hit Android and iOS app stores is Liyla and the Shadows of War, and it goes without surprise to say that the game hasn’t garnered anywhere near the amount of interest that Pokemon has.

The app developer has described the game as a being based on actual events, following the lives of a Palestinian father and his daughter, who lived in Gaza during the war of 2014. However, with strong political overtones, Apple initially rejected to classify it as a game, arguing that it was more suitable to be placed under the category of ‘reference’ or ‘news.’ That being said, the game’s developer, Rasheed Abueideh, has said that he expected Apple to completely reject his app, regardless of the category.

In an exclusive interview with Abueideh, we asked why the story of Liyla and her father was an important one to communicate. He tells us that “these children did not do anything wrong. They are victims of the injustice of war and we need to do something to protect the remaining children.”

The plot of the game follows a father who attempts to protect his daughter as he ventures towards a safer location in the war-torn Gaza strip. Players must avoid bombs and drones and make life or death decisions in order to keep the pair alive. The game also depicts real-life events from the 2014 assault on Gaza, including the killing of four boys playing football on the beach. 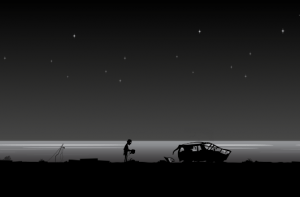 “The goal is to change the way most people think about Palestinians, and to show the truth and the impact of such a thing, these wars, on our families.”

One of the aims of the game is to allow gamers to imagine the reality of war. One of the most frustrating parts while playing the game is reaching a particular mount, and then falling due to an overhead missile; it truly makes you imagine how your frustration must be tenfold when faced with a real life situation.

The game is purposefully short, allowing you to realise how painfully short life is and how fleeting it can be in times of war and conflict, ending with informational text about the 2014 Gaza War. Above all, Rasheed Abueideh wants us to think about the reality, and to ask, “what if this happened to me.” He suggests that when it truly comes to it, the translation of the Palestinian plight “is not just a game, it’s a case and call for help.”