This year was one which thrust Muslim women, particularly those in hijab, into the limelight. We went from debates surrounding the burkini ban, to the ban of the niqab, to women needing to defend themselves from hate crimes and Islamophobia. With this, it meant that we were the cool kids that everyone wanted to discuss. Watch this round up of the women who basically OWNED this year and made it one of female empowerment and true success.

A 16 year old amateur boxer from St. Paul, Minnesota. For years Amaiya was not allowed to compete wearing the hijab but she continued to train regardless. Once she finally found an opponent and thought she would be able to fight wearing the hijab she was disqualified before the fight and left heartbroken. Her competitor, in an awesome gesture of support and unity shared the win with her. Amaiya continues to train at ‘The Circle of Discipline’ five days a week and teach classes on the weekends to women and youth.

Watch the video below:

A Muslim girl wasn’t allowed to box in a hijab, so her opponent shared victory with her…

Posted by The Muslim Vibe on Wednesday, November 23, 2016

Zee is the 24 year old vice president of the Deaf Planet Soul organisation. She runs self-defence classes to help those with hearing, cognitive and physical disabilities. She gained notice after the below video went viral, showing her teaching Muslim women to defend themselves from an Islamophobic attack. Since then, she has run several workshops which have been met with success and support all around.

Learn to defend against a bigot grabbing your hijab from behind!

Learn to defend against a bigot grabbing your hijab from behind! In this post-election hate-crime spike, self defense is more important than ever. Practice this move until it becomes muscle memory and teach your body to react before thinking.www.deafplanetsoul.org/self-defense-sign-up(via Zee Abdulla)

A 20 year old athlete from Turkey who gained (unwanted) attention for winning gold while wearing her headscarf at the 10th World Taekwondo Championships. She says that despite her win, alongside Emirhan Moran, people didn’t seem to care about her as a person, or her personal achievement; they cared only about the fact she wanted to keep her hijab on her journey to victory. You can read more about her journey here.

The newly elected, Minnesota House Representative for District 60B. She is the first Somali-American, Muslim woman in the nation to hold an office at this level. Notably, Ilhan was born in Somalia and since moving to the US in 1995, she took part in all the community and political projects she could before pursuing a degree in political sciences and international studies. As of 2015, Omar became  the Director of Policy & Initiatives of the Women Organizing Women Network, an association that advocates for women from East Africa to take on civic and political leadership roles. Watch her celebrate with her community and supporters here.

At the age of just 17, Iranian Wushu fighter Zahra won a silver medal at the Wushu Championships. She received Iran’s 5th gold medal in a contest with 51 countries at the games in Burgas, Bulgaria. Check out the performance that bagged her a medal below:

The first woman from Gaza to teach with Down Syndrome. Her school deals with other children with the syndrome and she has become a symbol of hope for them, and for other members of staff who worked alongside her when she was back at the school. Although she is only an assistant teacher, her unique position comes from being the mid-way point between the students and staff, as she can understand the struggles of the children and can communicate them effectively to her peers.

A bronze medalist in the Team Sabre Fencing contest in the Rio de Janeiro 2016 Summer Olympics. She is the first woman in hijab to represent Team USA at the Olympics. She started fencing at age 13 in high school and was initially introduced to the sport by her family. “My parents were looking for a sport for me to play where I wouldn’t have to alter the uniform as a Muslim woman.” With all this, Muhammad has her own fashion line, which is simply to die for – you can find it here. 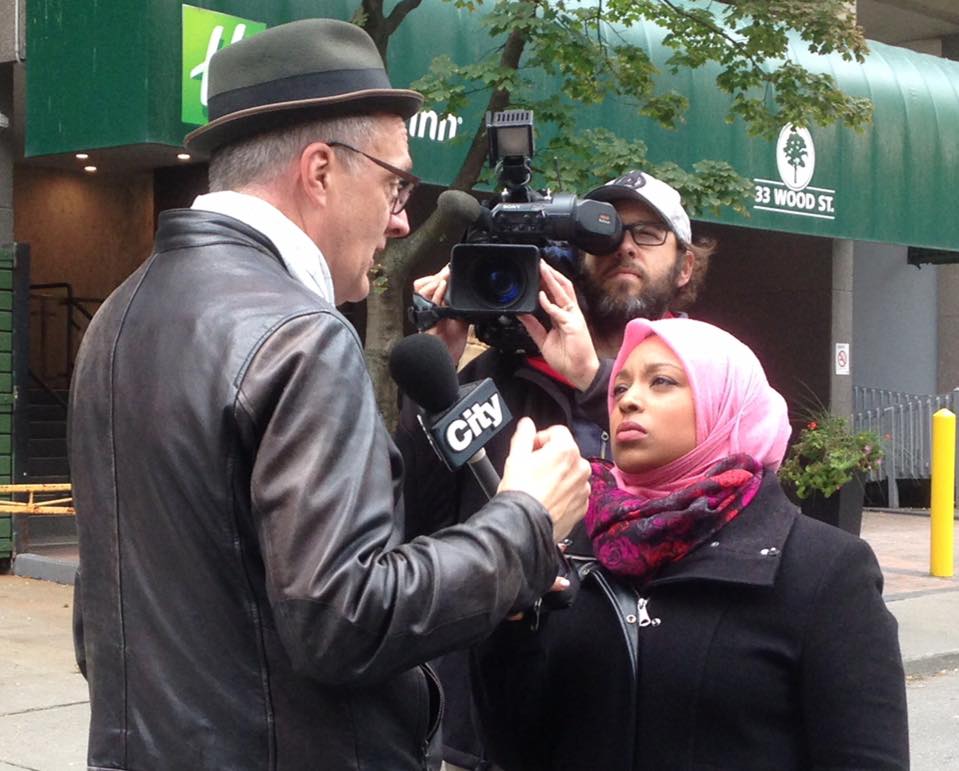 The first woman to feature on a mainstream news channel in Canada, whilst wearing hijab. Although she has been an on-air reporter since 2015, she made waves for becoming the face of change for Toronto’s City News Station, and Canada as a whole. She knew that moving onto the anchor desk was a huge step up in her career, but it took her editor to point out the larger significance.  ‘It wasn’t until my editor said, “Hey, great job! Was that a first for Canada? A woman in a hijab?” And I said yes. And so I tweeted about it,’ she said.

A fashion designer from Indonesia who won the New York Fashion Week this year as she delighted the crowds with her Spring Summer ’17 collection, D’Jakarta. Her spectacular Muslim women’s line was full of intricate designs and soft colours which appeals to every lady out there. She said that she wanted “to bring the Indonesian name to the fashion world, and use my clothes to introduce people to the different and diverse parts of Indonesia,” Hasibuan told The Jakarta Post… take a sneak peak at her awesome collection here.

2016 also saw Muslim women in the West from all walks of life take to social media and change the political climate by speaking up against politicians who claimed that Muslim women were either submissive, or simply had no voice. Our final shoutout goes to all of you, that utilised your voices for good and made a change…

Keep fighting the good fight in 2017!