Why do we do the things we do in Hajj?

It’s that time of the year again when millions of Muslims around the globe will once more gather in Makkah for the pilgrimage of Hajj. Hajj is one of the pillars of the Islamic faith and is described in the Holy Quran as a duty upon all Muslims to perform at least once in their lifetime.

“And it is the duty of mankind toward Allah to make pilgrimage to the House-for those who can afford the journey to it.” (The Holy Quran 3:97)

Being one of the largest peaceful congregations in the world, the aim of heading to Hajj is to cleanse oneself from sins and in doing so, to gain nearness to Allah (swt). Being a physically difficult journey, what does it mean spiritually and why do we perform certain actions when heading to Hajj? Here are a few, in no particular order:

One of the most important actions that one takes in Hajj is to wear their white clothing.[1] For women, this can be in any shape or form but for men, it needs to be something that does not contain any stitching. The significance of 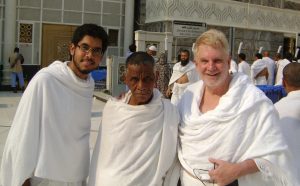 changing your clothes is to allow you to become uniform with everyone else around you. No longer will your clothing distinguish you from others around you; gone are the designer brands, the vibrant colours of your tribe or country, and gone are emblems of hierarchy or educational status such as turbans, suits and uniforms. Everyone is now on the same level, unified and on a journey to their Lord.
While wearing ihram, several actions also become haraam (forbidden). For example, the harming of any living thing is forbidden (including mosquitos out for your blood!), no fighting, hunting, vulgar language or perfumes is permitted. You are also not allowed to cut/trim hair or nails, as they should be left in their natural state. Additionally, all marital relations are to be suspended, marriage proposals and weddings are also delayed till after the completion of the pilgrimage.

The significance of wearing white is to signify purity, going alongside the promise from Allah that upon completion, they are forgiven of all sins.[2] Further to this, the ihram is symbolic of the kaffan (shroud) in which a person will be buried with and then raised with on the Day of Judgement. The sea of people entering Makkah in white is compared to the Day of Judgement as people will flood in wearing white, as they will do on that day. This then takes us on to another action in Hajj symbolic of that day. 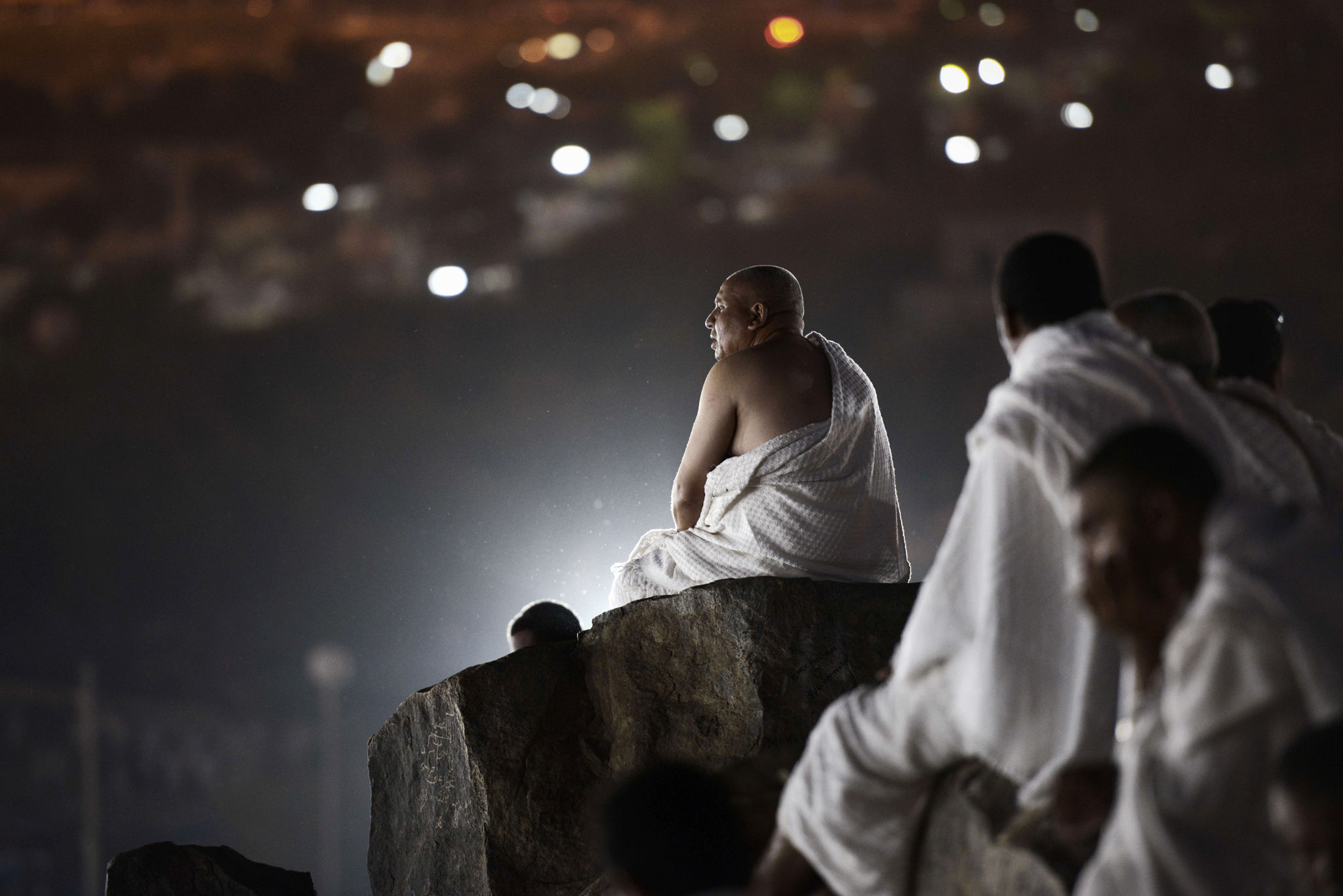 The day of Arafah is essentially the most important day in all of Hajj and without it, the pilgrimage is not accepted, nor is it complete. Arafah is said to represent the beginning of man’s creation. In the story of Adam (as), it is believed that upon his descent onto Earth, he arrived on Mount Arafat and it is on this mountain that he was reborn and turned to repent to Allah. When standing here, tears are shed and people turn to Allah to forgive their sins, to recite words of prayer and remembrance. One particularly eloquent and beautiful dua commonly recited on the plain is Dua Arafat which was taught to us by Hussain ibn Ali, the grandson of our beloved Prophet Muhammad.

The stand at Arafat is likened to the Day of judgement as on that day, people will be standing alongside millions and repent for their pasts. Whilst in your state of ihram and in your earnest heart, you and your peers will all be standing as equals in the eyes of Allah as you will on that day. With this, the mountain of Arafat is also known as the mountain of rahma (mercy) as on this day, people will be all encompassed with the mercy of their Lord and he rewards them with the forgiveness of their sins. 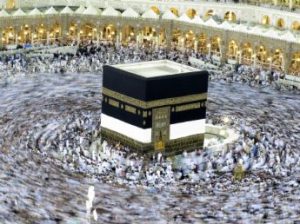 One of the things one often hears is the talbiyyah (people answering the call) of Allah, His invite for you to return to Him and your complete submission. People will say “labbayk allahomma labbayk,” – here I am at Your service. With these words, people are vocalising their response to His invite and His calling them to Hajj. In this position, the pilgrim is confirming their intention to perform Hajj, that they are in a state or purity, that they have spent so much freely for this pilgrimage, that they have left their homes and families for this, that they will accept the fatigue and the harsh weather, to avoid all things that are haraam.

The conditions are there. The response?

This is usually uttered before people go towards the Holy Kaaba, the nerve centre of Islam and the direction in which people pray. It is said that upon seeing the Kaaba, your deepest wishes and sincerest of prayers are accepted. With the Kaaba in the middle and the left shoulder of the pilgrims towards it, the pilgrims will walk around it seven times, anticlockwise. It is suggested that the significance of this is to show that Allah is at the heart and our lives should revolve around Him. While doing tawaf (circumambulation), the pilgrims are showing that they are no longer the centre of their own lives, but are making a pledge to Allah to make their lives revolve around pleasing Him, giving the ultimate submission to Him, which is the essence of being a Muslim.

Sa’iy (walking between the mounts of Safa and Marwa) 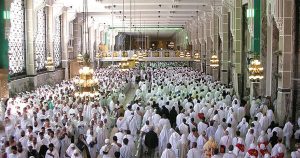 The word sa’iy suggests that one is striving, or trying, and in this case, one is remembering the movement of Hajar (as), the wife of Ibrahim (as), who ran from Safa to Marwa in the sear
ch of water for her son. In doing so, the pilgrim is almost standing in the role of Hajar, to understand her plight as a woman, a mother and above all, of someone who gave her utter submission and faith in Allah to aid her.

In her complete trust in Him, she was rewarded by Allah not only in the form of water (from which stems the well of Zamzam), but that for centuries to come, people would pay homage to her and her plight and to also use her actions to show full faith and trust in Allah.

There are three monuments, (or ‘satans’) separated by one hundred metres. Each one is said to symbolist a statue or an idol that we have taken for ourselves. This doesn’t literally mean that people have started to follow idols as opposed to Allah, but they are figurative representations of the things that we have allowed to do 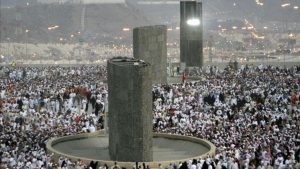 minate our lives and distract us from worshipping Allah justly.

After collecting pebbles, one is to hit these idols/monuments, showing that by taking this pilgrimage, you are making an oath to not allow these things to hold you back from worship. The pilgrim is essentially hitting their demons, and making a show of hitting any temptation that prevents you from doing so. This is also a symbolic re-enactment of Ibrahim (as) hitting three pillars that represent his being tempted by the devil to disobey Allah. In crushing the metaphorical devils, one effectively comes closer to their Creator.

Sacrifice and Taqsir (clipping the hair)

Everyone knows of how Ibrahim dreamt that he was being ordered to sacrifice his son Ismail; Hajj is incomplete without emulating this sacrifice. When Ibrahim was on his way to do this, he was showing that he was willing to sacrifice even the closest to him in the way of Allah and when seeing the sincerity of his actions, Allah rewarded him with a sheep that he was to sacrifice instead. With this, the pilgrim is showing that they too are willing to give up everything in the way of their Lord. One of the benefits of doing so is that when buying the animal, the money shows how the pilgrim is pleasing Allah by the giving of wealth in His name. Further to this, the meat will be distributed to the poor and needy and thus you’re helping those who may not have been able to find a solid meal without having to pay a sum for this. 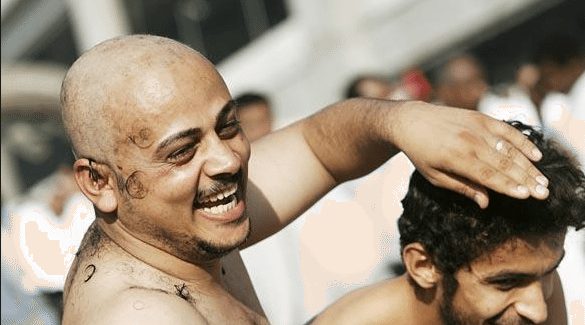 The act of halq/taqsir (clipping of the hair) shows that one is ready to get rid of something that is often seen as a symbol of vanity. Cutting it symbolises removing things that hold us back from being the perfect humans that we should be. It is an act of humility and shedding away things that may make us vain or feel that we are better than others in any way.

[1] Imam Al-Ridha (peace be upon him) has said: “Indeed they have been ordered to be in the state of ihram in order that they humble themselves before entering the sanctuary and the safe place of Allah, and so that they do not divert and preoccupy themselves with anything of the affairs od this world and its adornments and pleasures; and so that they be serious in what they are engaged in, journeying to Him and approaching Him with all their being.” – Wasai’l Al-Shia: Volume 9, Page 3, Number 6.

[2] The Commander of the Faithful (peace be upon him) has said: Those who go to Makkah for obligatory and voluntary pilgrimage (Hajj and Umrah) are the guests of Allah, and His gift to them is forgiveness.” – Al-Khisal: Page 620, Number 10.

Are you going to Hajj this year? Send in your stories to [email protected] and we’d love to feature them! 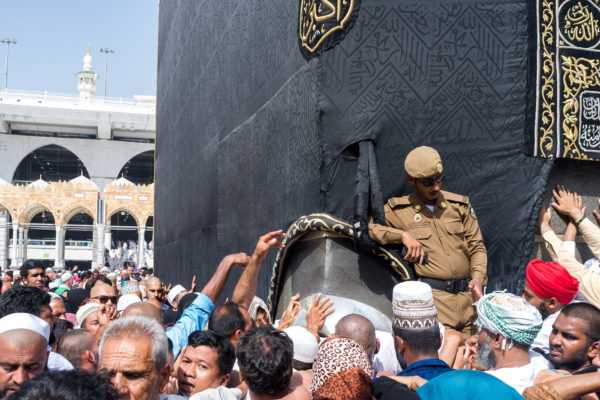 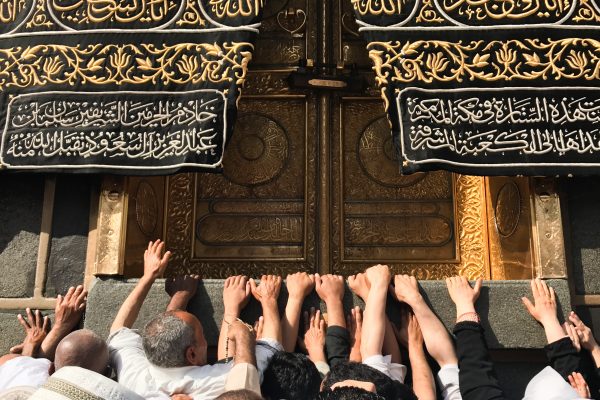